The final element of the financial paperwork for the 2015 fiscal year has been delivered by the City's Finance Department, with the City of Prince Rupert providing details of its Statement of Financial information for 2015, a document that highlights just how the city allocates its financials each year.

The review which is usually delivered from mid to late June, provides a list of the salary and expenses from the city's elected officials, as well as the salary review for those employees of the City making over 75,000 per year.

This years data starts with a look at City Council members, providing the first overview of council's salary and expenses for a full year.

From this years report the total amount of remuneration and taxable benefits for the Mayor and six members of Council provided a total of $196,579.

The largest sum of that amount was collected by Mayor Lee Brain, who received $61,801 in remuneration along with a listing of $34,857 in expenses for 2015.

That marks a significant increase from the last full year numbers for the last year on Council for then Mayor Jack Mussallem.

The increase to the base salary for Mayor Brain came after City Council voted to make him a full time Mayor in May of 2015, that decision added to the previous Mayor's salary, with the funding for the pay bump of $17,000 allocated through the planning for major projects component of the City's Legacy Fund investments.

This years surge in travel expenses was addressed by Mayor Brain by way of a Facebook post, with the Mayor noting that 2015 required a large amount of travel related to LNG discussions, noting in his comments that the task required above average amount of participation in LNG related negotiations with the money taken from the Planning for Major projects budget.

In 2015 I traveled several times to meet with Ministers from both levels of government and proponents related to proposed developments. These additional expenses are taken from the Planning for Major Projects budget, money specifically set aside from the lease option on Lot 444, so that the taxpayers are not adversely impacted. -- Notes from Mayor Brain's facebook post on his expenses for 2015

The Mayor provided his travel itinerary for 2015 (click below) as a guideline to his work on behalf of the city, while noting how the $34,857 in expenses claimed had been divided. Advising that $22,991,28 was related to planning for Major Projects and $11,865,26 pertained to City Operations.

There was no further breakdown of the expenses listed related to those two categories. 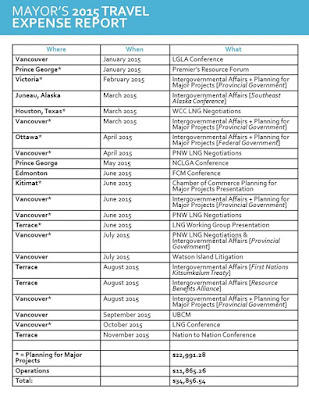 As for the figures for the six City Council members, there was little change in their pay package for the most part, with each earning the base salary of 13,947, a figure up slightly from their salaries of 13,180 recorded in 2014.

Councillor Niesh claimed the highest amount of expenses on the year at $4,914, while Councillor Thorkelson held the charges down to but $302 for 2015.

The Canada Revenue Agency guidelines note that one third of an elected officials salary is deemed as tax free. 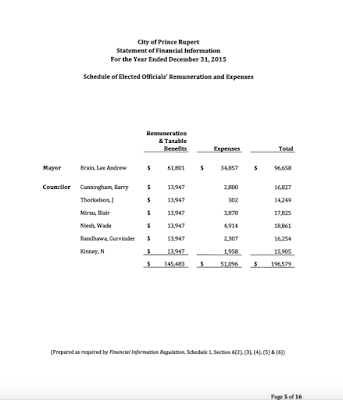 City staff paycheques increased in a number of areas as well, led by City Manager Robert Long who claims the top spot in this years listings, with Remuneration and  Taxable benefits of $254,797, and combined expenses of $26,846 from 2015.

Among some of the other more prominent of City staff positions the upper management ranks look like this.

The City's Financial Officer Corrine Bomben received $155,759 in remuneration and Taxable Benefits, with combined expenses of $11,422 for 2015. That also is an increase in salary for the year, compared to the numbers from last year which set the CFO's salary at $121,877.

Willa Thorpe, The City's Director of Recreation and Community Services is listed as receiving $101,654 in remuneration and taxable benefits, with expenses of $1,222 in 2015

The remainder of the list that makes up the SOFI report consists of those Civic workers making over 75,000 dollars in 2015.

Fifty-two of the Two hundred and eight employees of the city are included in the review for the year of those making over 75,000 for 2015, a number which when combined with those employees making under $75,000, brings the total employee remuneration package of $13,575,579.

The list of 52 from the SOFI report for 2015 adds an additional three names of those collecting over 75,000 dollars from the numbers of last year which found 49 on the civic payroll above the 75,000 dollar mark.

The incremental increases indicate continue growth on the top end of the pay scale at the city, the numbers from 2013 when it was noted that 45 civic employees were making over $75,000.

The largest contingent that makes up the list comes from the Prince Rupert Fire/Rescue Department, with 19 firefighters and three dispatchers listed in the 2015 report, of that number, thirteen are members of the over $100,000 dollar club.

When it comes to the other thirty employees listed for 2015, sixteen take their place in the over $100,000 club.

The City of Prince Rupert also has a contract policing agreement with the RCMP, a glimpse into the financial commitment required for that can be found on the Schedule of Suppliers of Goods and Services which lists $3,285,272 directed towards the Receiver General for Canada for RCMP E Division.

The full document is available as part of the City's Agenda package for a Special Regular council session for later today at 5PM, the SOFI report begins on page 9 of the Agenda.

Once approved the document will be available on the City's Financial Statements page.

As well our City archive page provides an overview of a range of items associated with City Operations and issues, you can seek out further background here.

Email ThisBlogThis!Share to TwitterShare to FacebookShare to Pinterest
Labels: Salary and expenses on the rise from Prince Rupert's SOFI report