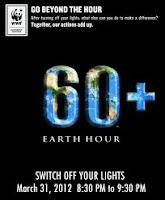 The annual day dedicated to energy conservation came and went on March 31st and as far as participation goes, Prince Rupert was around the middle of the pack go BC communities to turn off their lights for an hour.

Earth Hour which is the creation of the World Wildlife Fund and is supported provincially by BC Hydro, first took place in 2007 and since that time grew from its humble roots of an Australian based initiative, with Toronto signing on in 2008 the idea soon spread across the globe.

The 2012 event across the Province of British Columbians saved 121 megawatt hours of electricity, reducing the provinces electricity load by 1.67 per cent. Which BC Hydro says works out to the equivalent of turning off 9 million 12.5 watt light bulbs of the LED variety.

Revelstoke was the community most in tune with conservation this year, with a 12.1 percent reduction in energy usage, Prince Rupert's totals were 4.1% while the energy hogs of Fort St. James reduced their energy consumption by only 0.2%

The Northern View-- Rupertites come out to celebrate Earth Hour on the waterfront
Vancouver Province-- Revelstoke leads B. C. in power conservation during Earth Hour
Global BC-- B. C. communities conserve 1.6 per cent of energy during Earth Hour 2012
Posted by . at 8:32 AM