Rampage undefeated streak comes to an end after Cariboo travels

After a run of Seven games, the Prince Rupert Rampage had their first exposure to the wrong side of the scoreboard this weekend, with the Rhinos falling from the ranks of the undefeated at the hands of the Williams Lake Stampeders on Saturday, followed by a second loss in Quesnel on Sunday afternoon.

The Rhinos started out strong in the Stampede City picking up the first two goals of the game less than two minutes apart in the middle of the first period.

Austin Weir started the Rampage off on the right skate at 7:01 with a goal, the assist going to Reid Lindsay.

Hunter Atchison was on the board at 8:53 with Judd Repole and Tyler Ostrom providing the helpers.

The quick 2-0 lead catching the attention of the home town Stampeders who then answered with five straight goals over three periods, taking a 5-2 lead to the midway point of period three when Brett Arnet picked up the final Rampage goal of the night, with Kory Movold and Jude Repole gaining the assists.

Things were fairly sedate in period one but the second and third frames provided for much physical play and a parade to the penalty box for both sides.

The game's final a 5-3 victory for the Stamps who now are nipping at the heels of the Rampage for top spot in the standings.

The Boxscore for the contest is available here.

Things didn't go much better for the road squad on Sunday, the afternoon contest with Quesnel going the way of the Kangaroos who shut down the Rampage offence, holding them off the score sheet to record a 5-0 shut out.

The game summary is not available for that contest as of yet.

With the twin losses the Rampage now have a record of 7-2 heading into the Christmas period.  Though that grasp of the top spot could be in peril over the next month.

Another quirk of the schedule for this season finds the Rhinos off the ice now until the first week of January when they host the Terrace River Kings on January 7th to dig into the ice in 2023 and start the push towards the CIHL playoffs.

How the standings look for the team will be a little bit clearer when the CIHL Christmas break starts on December 18.

More notes on the Rampage can be followed through their Social Media page here.

A wider overview of the CIHL can be explored through our archive page.

Counterattack program underway across Northwest BC

The annual Counterattack program had its launch over the weekend, some recent instances of the roadside checks around Prince Rupert having been chronicled on some the social media feeds in the region over the last few days.

That as members of the Prince Rupert detachment of the RCMP join detachments across the province in the month long campaign.

The program which looks to keep impaired drivers off the roads is a partnership between the RCMP and ICBC and was officially launched at the end of November, with this past weekend making for the first of the ongoing roadside check stops province wide.

Mike Farnworth, the Minister of Public Safety and Solicitor General in BC highlighted the dangers of impaired driving and the warning that the Roadside program brings to the season.

"Driving impaired after drinking alcohol is dangerous and a crime. Unfortunately, there are still those willing to take a chance with their own lives, the lives of their passengers and the lives of other road users. If you have consumed alcohol – stay off our roads. If you instead choose to put yourself and others at risk, consider yourself warned: the police are out there with stepped-up enforcement."

The Prince Rupert RCMP noted the start of the program through their Social Media page.

More on the Road check program and further information from ICBC can be found here.

The details towards enforcement of the impaired laws can be examined here.

Further notes on the work of Emergency Responders across the Northwest can be explored here.

CityWest has set the pace for seasonal gift giving this year with the return of the Twelve Days of Christmas, the popular reward for customers marks its ninth season of treats for subscribers.

The Prince Rupert based communication company lunched their 2022 gift giving season through their website and social media feeds last week.
Today marks Day Three of the Twelve Days and One year of Free Internet Service will be awarded later  in the day. 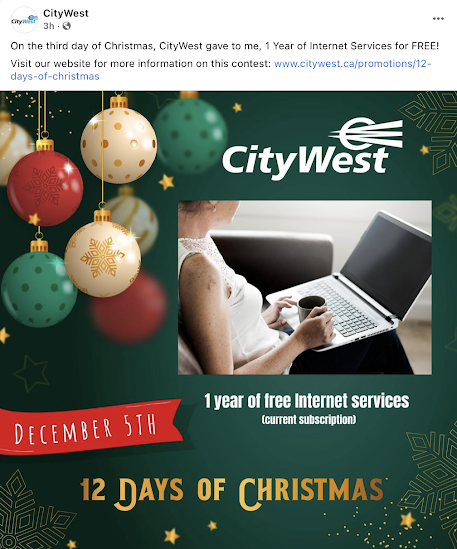 Over the course of the Gift Giving period that started on November 30th, CityWest will make a draw and award a gift over the course of each business day, with something special soon to be on the way to a lucky CityWest subscriber somewhere in the Northwest.

There's no form to fill out for the Twelve Days of Christmas, as all CityWest customers are automatically entered in the daily draws.
Learn more about the Twelve Days of Christmas here.
For updates on the Christmas celebration, who is taking home the swag and other notes on CityWest see their Facebook page and Instagram feed.
A look at growing number of CityWest storefront locations can be explored here, along with contact information for those living in the vicinity of those offices.

For more notes of interest on Communications in the Northwest see our archive page here.

The Gitxaala Nation and their partners at Seaspan Marine will be showing off some Marine assets tomorrow at the Cow Bay dock tomorrow afternoon, with the vessel Kestrel to be alongside for an open house and tour.

The ship assist service which will go into operation on January 1st, will be crewed 24 Hours a day, 365 days a year, available to offer ship docking and ship escort in local waters and to the range of terminal facilities found on the Prince Rupert waterfront. 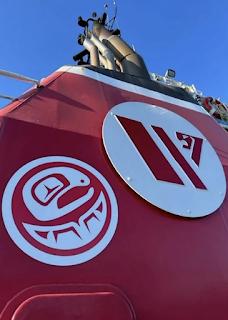 In an information release from Friday, the two partners noted of the unique opportunity that the new service is brining to the region.

Gitxaala Nation has unlimited knowledge of the rugged west coast having lived, fished and navigated these waters for millenniums.

For over 130 years, Seaspan has been an integral part of British Columbia's waterways by providing ship assist and escort service between Alaska and Mexico.

Gitxaala Nation Chief Counillor Linda Innes observed how the new venture celebrates the Nation's ties to the water.
"The Gitxaala, also known as People of the Saltwater, are one of the most ancient societies on the coast and we continue to celebrate our history, practice our traditions cherish our lands, waters and resources.
This new relationship with Seaspan will ensure our people can use our knowledge and experience in our traditional territory while developing long-term jobs and economic opportunities right here at home."
The partnership with Seaspan which has Canadian operations out of North Vancouver is just the latest of enterprise's that the Gitxaala Nation have taken on through the Gitxaala Enterprises Corporation.
Tomorrows sneak preview and Open House takes place from Noon to 3:30 at the Cow Bay Dock at the Atlin Terminal.
Learn more about the Service set to launch in January here.
It's not the first time that Seaspan has partnered with an Indigenous Nation, in 2019, the North Vancouver company and the Haisla announced their plans to work together towards a tug service, that to serve the LNG Canada project in Kitimat.
Posted by . at 12:58 PM No comments:

The annual listing of Community Enhancement Grants comes with tonight's final public session for Prince Rupert City Council, with the City's Chief Financial Officer outlining the process towards the final accounts for 2023.

Of note from CFO Corinne Bomben's report, which you can review below, is that two organizations the Prince Rupert Library and the SPCA have yet to finalize their funding requests for 2023.

As well Ms. Bomben's report notes of the challenges to the city from a mother areas that could impact towards the program.

The report noting that there is:  minimal new taxation from new builds expected, along with potential federal grant in lieu losses and annual major industrial taxation reductions. This combined with anticipated cost increases due to inflation results in an expected tax increase larger than that adopted in the 2022 budget. Capital projects continue to be financed through as many other sources of revenues as possible to mitigate fee and tax increases for ongoing infrastructure renewal.

Towards this years Community Enhancement Grand Process, a tax increase is estimated at 1 percent to bring in the 200,000 dollars required for 2023. 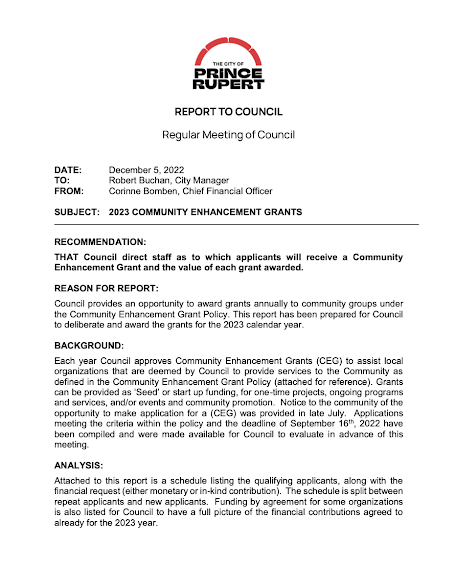 The requested schedule of funding for the Grant requests is outlined below: 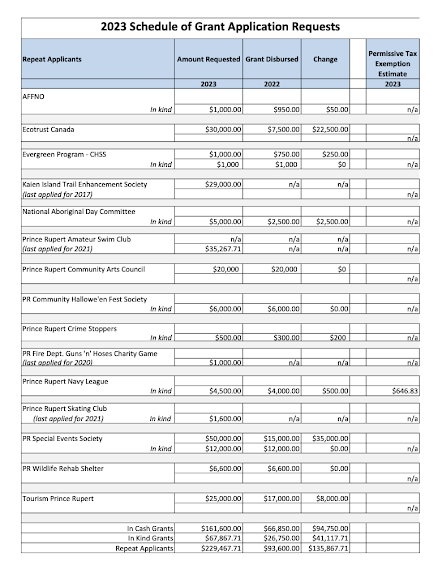 Council members will have opportunity to discuss whether they accept the recommendations, as well as to how they wish to move forward with the annual program following the review of the report at tonight's Council Session.

The full report can be reviewed through the Council Agenda package starting on page 12 .

More notes on today's City Council Session can be reviewed from our Council Preview.

Tomorrow marks the anniversary of the murders of 14 female students at Ecole Polytechnique de  Montreal and as has been the remembrances of the past, the North Coast Transition Society will be holding a vigil at Coast Mountain College in the city to remember the women from Montreal and to take a stand against all gender based violence.

Tuesday's remembrance and vigil takes place from Noon to 1 PM in the Multi-Purpose room of the Prince Rupert Campus of the college.

This years commemoration in the city comes only a few weeks past the tragic day at the Ocean Centre Mall which claimed the life of Patty Forman.

That horrific incident will also  be on the minds of many of those taking part in the Prince Rupert vigil. 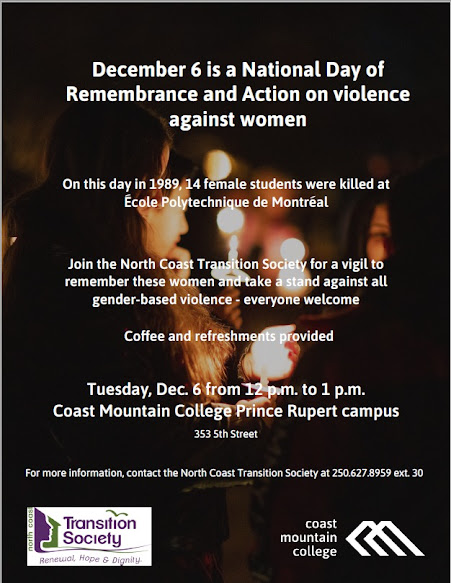 The Federal Government has an information page (which you can review here) that provides some background to the annual remembrance and calls for a moment of silence at 11AM.

Tuesday's Remembrance of remembers the victims of violence of December 6th. 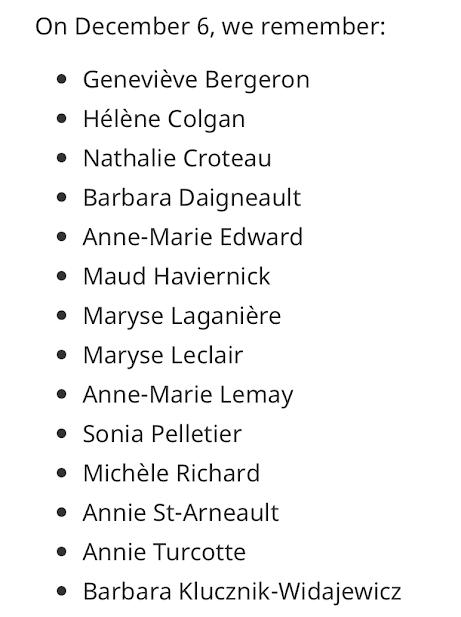 More notes on Community Events can be followed from our archive page.

Sales were brisk and so were the temperatures on Saturday afternoon as the Prince Rupert Rotary Club launched its 2022 Christmas Tree Sale.

The Prince Rupert tradition has once again set up shop in the Tennis Courts of Sixth Avenue East at McBride.

The early birds of Saturday had the first pick of the 2022 crop with quite a few Rupertites stopping by to check out the selection.

The trees which were transported from the Terrace area by Bandsrtra  Transportation are lined up inside the tennis courts in a range of sizes.

The supply for 2022 unloaded by some helpful elves from Prince Rupert Minor Hockey.

As we noted last week, the Sale continues through until December 18th or the supply runs out.

Times for the Sale can be reviewed from the sign that marks the entrance to the Rotary Forest on Sixth Avenue East.

The money Rotarians raise from their Annual Tree Sale is put towards some of their many local community initiatives.

Updates on the tree sale as it moves towards conclusion on December 18th can be found from the Prince Rupert Rotary Social Media Stream.

Community Note themes can be explored through our archive page.