Monday's public comment opportunity as part of the City Council session, provided for an interesting review of how Prince Rupert Council believes they are handling the issue of potential development of a parcel of land along Tuck inlet.

As we outlined on the blog last month, Part of Lot 444, features a section of land that is adjacent to the City's Watershed and was recently proposed as a potential site for an LNG terminal development.

That prospect became the theme of of discussion as part of the Public Comments portion of the Committee of the Whole session of Monday evening. With Larry Golden, a frequent observer of much of Council's work approaching the microphone to make a few inquiries of council over their plans for
the land in question.

The first being a note that so far in the process, there has been no outline of public meetings and other features of public overview of the proposal. 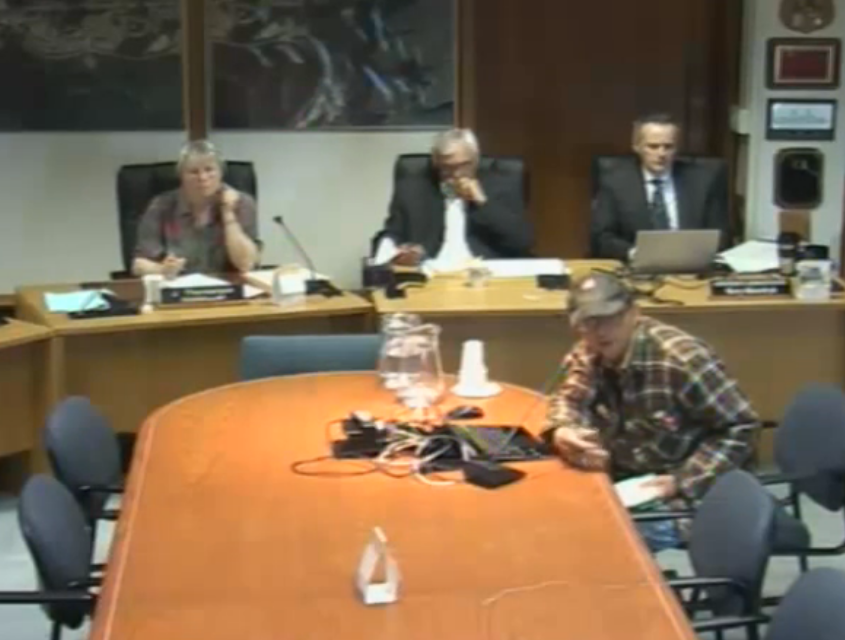 During the course of his questions of council it seemed that at times, some Council and staff members were approaching Mr. Golden's efforts with something a little less than with enthusiasm.

Though through the course of the discussion, he finally seemed to break through to gain some insight into the process ahead for the proposed development of the parcel of land around Tuck Inlet.

One of the more interesting observations on the theme came from City Manager Robert Long, who provided Mr. Golden with a bit of a backgrounder on the nature of the wholly owned Legacy company that the city will operate regarding the land in question.

Suggesting that the nature of the company's operations could be considered similar to the way that CityWest has been created, something that may or many not provide much in the way of reassurance for some in the community.

Particularly when you consider some of the more recent discussion points from Council when it comes to the City owned tele-communication company and the financial return to the city that it has provided for in recent years.

Councillor Thorkelson observed that she wasn't quite sure what Mr. Golden was trying to get at through his line of questioning.

She then however did offer up some comments on the topic of the proposed project and stated that Council is dealing with that, explaining that there would be a zoning meeting put in place to rezone the land to LNG only.

She also outlined up her thoughts on the nature of the wholly owned company and its role in the process ahead, with money gained from any land sale to be allocated towards public use such community infrastructure such as streets, fixing the dam and such.

She reinforced that the whole process would be thorough and public.

The Mayor also highlighted the city's plan to hold public meetings, and introduction of the rezoning process and the public comment that goes with it.

He also reviewed the intention of the city to hire a third party, who will be tasked with a  review of the proposed project and to do an analysis as to how the development may impact the surrounding water, surrounding land and the air shed

Councillor Ashley outlined her talking points on the theme, advising that while dates have not been set up as of yet, all the stages of the process ahead would be made public and council would be seeking as much public engagement as possible.

Councillor Cunningham provided his take on Mr. Golden's points of concern, a outlining that Council wants this to be totally transparent to the community.

Highlighting how the city owns the land and that the community will have a big say with what the City does with it, adding that it will not be like any other land on the waterfront.

Councillors Garon, Kinney and Carlick-Pearson offered up no thoughts or comments on the nature of Mr. Golden's questions, or on the process ahead for the question of Lot 444 development.

As a whole Council seems to be reacting with a bit of consternation as to why some residents may be more concerned about the process than Council members appear to be.

For the most part there is some basis for such concern, beginning with how the land became available for development.

As we remember, Lot 444 came to be placed within the municipal boundary after Council sought  approval to expand the boundary, outlined at the time as a way to bring the watershed to be within the civic boundary.

At that time and during the process in place to seek comment from the public, no mention of developing the land into an LNG terminal location was declared.

Then there's the nature of that process Council used to secure that approval, using the Alternate Approval Process to seek the comment from the public.

That consultation process is one that both Councillors Ashley and Thorkelson had expressed concerns over in the past. So to use that method to expand the municipal boundary and then to also turn around and announce that the land will be offered out for development certainly raised a few eyes in the community.

Perhaps much of the concern over the city's plans for the Tuck Inlet land parcel stems from the lack of information that the City and Council delivers on issues of this type.

They have been slow to provide any public notices on their plan ahead when it comes to Lot 444 and have not made much of an effort to provide background information on the proposal on the city website. A portal that should be used to much more effect by Council, so as to avoid some of these controversies.

Beyond that, the frequent use of special closed sessions by this Council, (12 so far in 2014) doesn't provide the community with the impression that much information is to be expected from Council in their twice a month public sessions.

And if one goes through the archives of past Council sessions, there's really little in the way of discussion between councillors and staff on issues such as this one that take place in those public sessions.

The fact that a resident had to raise questions in one of the few public opportunities available to discuss issues with Council, should be an indication that the City and Council needs to be more engaged with the community on such issues.

Through their talking points at Monday's public session, Council members seem to be floating the always popular theme of transparency, a very much over used word by politicians.

Mr. Golden's comments weren't particularly critical, more to the point he was simply seeking some basic information on a topic of which little information has been provided.

Considering the tone and content of their commentary and follow up remarks to Mr. Golden's very basic questions, the community no doubt will be looking for Council and the City to provide prompt notification, frequent updates and much more in the way of information on any proposed developments that involve Lot 444.

You can review the full discussion from the Committee of the Whole session through the City's Video Archive page, the conversation starts at 14:30 and continues on until 23:30 .

For further items of note from Prince Rupert City Council see our archive page.
Posted by . at 9:10 AM