Telus, wants you to tell them where to spend the money! 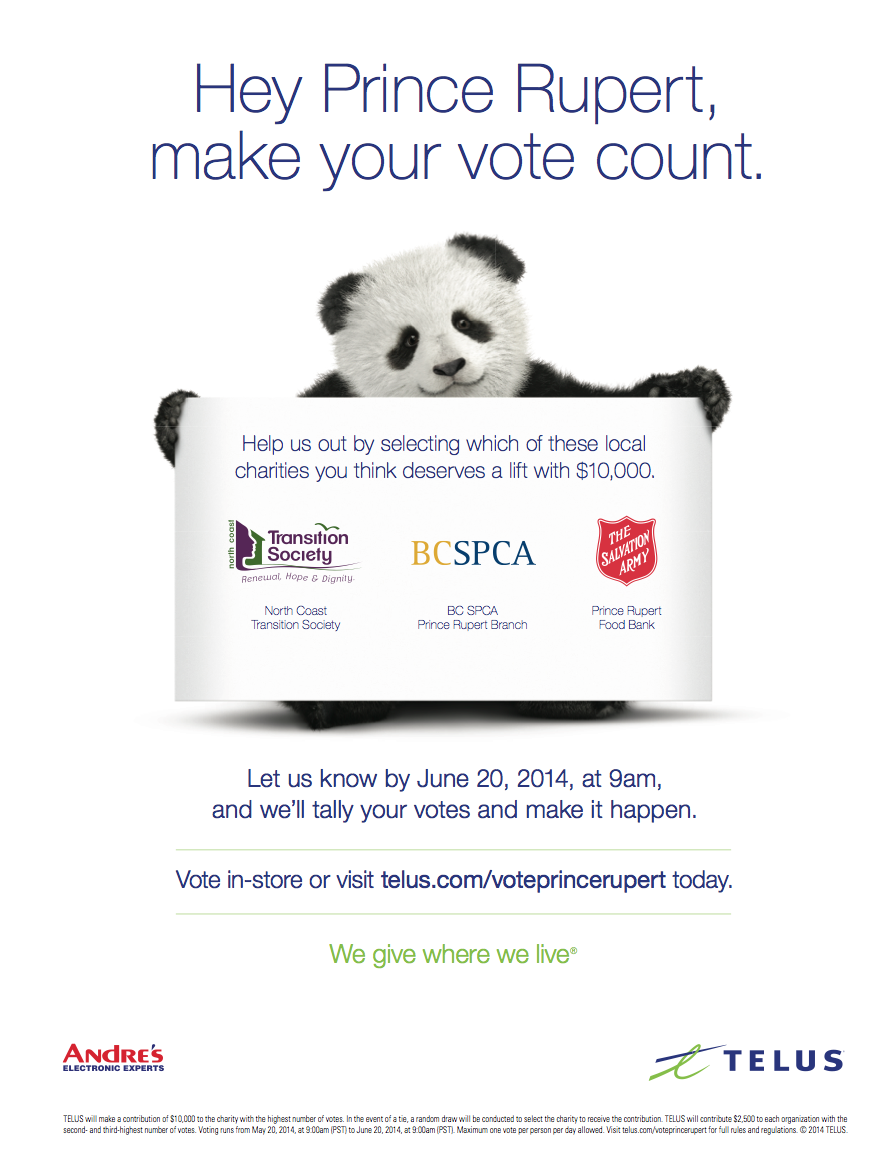 The recent introduction of the Telus brand on the North Coast has clearly caught the attention of residents of the region and not just for the cellular phone services that the communication company has to offer.

Last week, Andre's Electronics Experts, the local distributor of Telus products in the region hosted a very well received Grand Opening of their 3rd Avenue West location.  A day long event which featured a steady stream of interested customers checking out the stock and learning more on the offers to be had at Prince Rupert's newest electronics dealer.

In recent months, Telus has made a fairly impressive push to expand their reach and presence in the neighbourhoods of Prince Rupert and Port Edward, and as they look to connect with potential new customers they're offering up a pretty neighbourly opportunity to the community.

Starting last week, Telus outlined a community engagement program that has asked residents of the north coast go to their website and cast a ballot as to which organization in the region should receive a donation of up to 10,000 dollars from the Telus Charitable fund.

Those organizations that finish second or third will, also receive a cash donation from the Telus fund.

The three groups on the ballot for the North Coast are The North Coast Transition Society, Salvation Army Food Bank and BCSPCA's Prince Rupert branch.

You can cast your ballot (one vote, per email per day) here.

Telus will also have voting opportunities from the program available at their booth during Seafest, both at the Andre's location on Seafest Saturday and on the waterfront during the Sunday events of the 15th.

The deadline for voting for the local charities will be June 20th at 9 AM, after which Telus will tally up the votes and award the donation.

As those attending the Seafest events cast their ballots at the Telus booths, they can also take advantage of the opportunity to play Spin and Win, with a range of prizes available for the winning.

Another aspect of the commitment of Telus and Andre's to the Prince Rupert region, is their current support for the Prince Rupert Food bank. With the local Andre's store accepting non-perishable food items into their store at 3rd Avenue and Fifth Street.

As part of that initiative they will match the dollar amount of the donated items and donate that amount to the food bank.

To find out more about their community engagement just drop into their 3rd Avenue West location.