"In six to eight months from now we could be expecting a lot more aircraft traffic here.  And. so  once again as I've said in the past, here we are suffering a reduction of service, when in reality, in the next number of months we're going to be looking for  improved safety and improved ways for access and egress -- Mayor Jack Mussallem outlining his thoughts on the announced closure of the Prince Rupert Flight Services Station.

During Monday evening's Council session, The Mayor and the five Councillors in attendance, spent a fair amount of time discussing the pending closure of the Nav Canada Flight Services Station at Seal Cove, with Council then putting together a plan to seek to have that decision reversed by the Air Navigation service.

On Monday, the Mayor outlined the nature of the closure, advising Council that the Prince Rupert Airport Authority had first heard word of the proposed closure three to four weeks ago, an advisory that somehow must not have been relayed to many on Council.

Included among those that were unaware of the developments was Councillor Anna Ashley, who advised Council that the first she had heard of the station's closure was from this item from the weekly newspaper from June 6th.

Ashley, after learning of the station's fate, asked for the item to be added to Monday's agenda, which offered up an opportunity for many of the councillors that were in attendance to weigh in on the topic with their thoughts.

And weigh in they did, with most of the Councillors providing for a lengthy list of addressees for the City's correspondence of concern to be delivered to.

Those to be informed on the issue include the Senate of Canada, Nathan Cullen, the MP for Skeena-Bulkley Valley, North Coast MLA Jennifer Rice, British Columbia Transportation Minister Todd Stone, Transportation Union officials and Transport Canada officials to name a few.

The puzzling thing about Council's approach however, is that one month gap that seemingly left what is considered an important issue on the back burner for more immediate action.

Particularly of concern when it comes to this particular issue, is that until the Northern View published an article on the closure, Council was seemingly unaware of the Nav Canada plan.

Somehow we would like to think that Council has more awareness on major issues other than what they are reading in a weekly paper.

In addition to his introduction of the topic to Council on Monday evening, the Mayor during his Mayor's report that closes each session advised that he had discussed the closure issue with a visiting Federal Cabinet Minister in May.

Yet again, somehow the members of Council didn't discuss the topic, let alone take any action on it until the second week of June.

The flow of communication on the file between the Airport Authority, the Mayor and among Councillor's was clearly something that should have been more proactive, which would perhaps have provided for more lead time in trying to save the service. 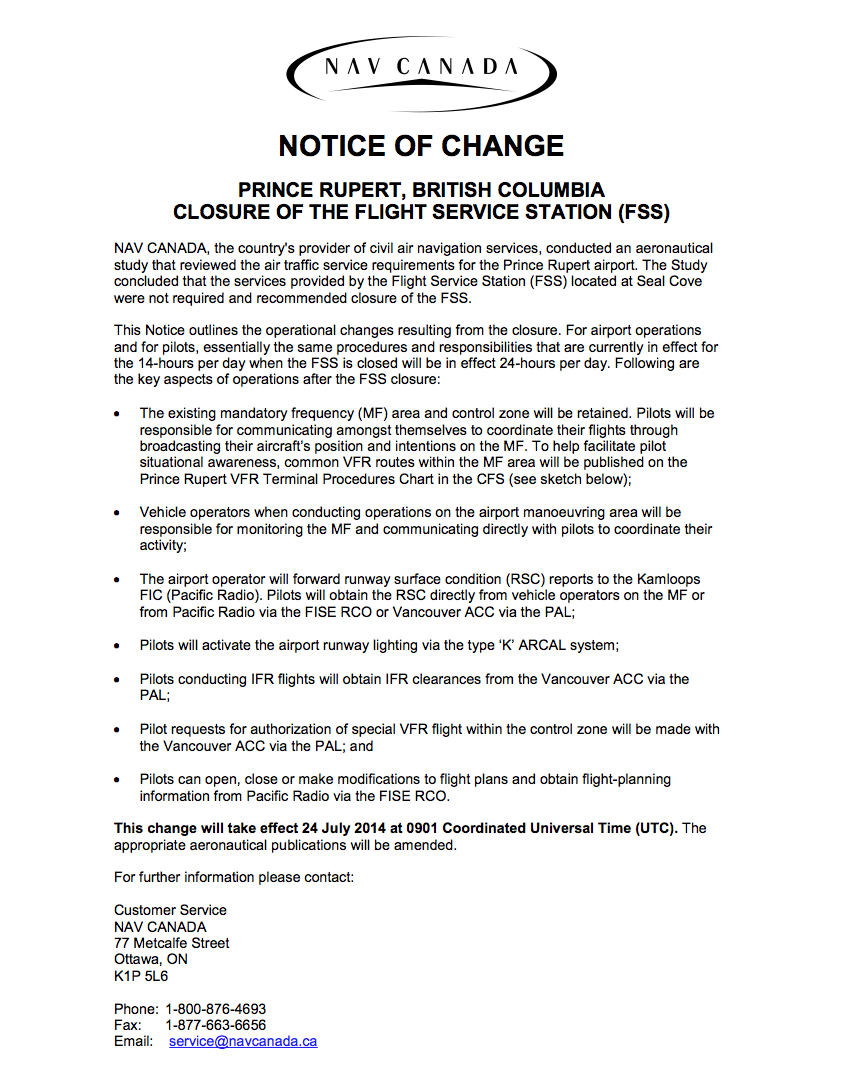 That one month delay would seem to be leaving the city to play a frantic game of catch up with the clock ticking to the station's closure. That original lack of action may have provided the wrong message to Nav Canada as they made their plans to issue the closure notice.

Had council moved to action when they first heard word of the planned closure, then perhaps Nav Canada could have been asked to explain the decision in a public forum, receiving comments from the public as to the impact that their decision is going to have for those that fly in the region.

The nature of an arbitrary closure, without the process of a public hearing or comment session in the affected community is something that someone should take up with not only Nav Canada and Transport Canada, but with both of the region's elected officials on the provincial and federal scene.

The background to the notice can be found from this item from the Nav Canada website, which outlines the procedures for aviators to follow once the doors are locked and the Nav Canada staff have transferred out.

During their discussion City Council members made a number of valid points regarding the closure notice, expressing concern for the growing volume of air traffic at the Seal Cove air base and with development plans in the works for the region, the prospect that both float plane, helicopter and fixed wing movements all could increase across the region as industrial projects come on line.

Council members made mention of this interview that former Councillor Ken Cote gave to the CBC Daybreak North program on Monday morning, outlining the impact that the closure will have on air services and safety in the region.

Council framed many of their concerns on the issue on Monday night from those comments and experiences from Mr. Cote's work as a pilot on the North Coast.

For more background on the issue, Daybreak North also featured this interview with a Nav Canada representative who outlined the aviation service provider's view of things on Tuesday.

After a fairly strenuous discussion period on the topic, Council then voted to send one letter immediately to express their concern over the decision.

With a second letter to follow that will include the signatures of many of the communities in the region that rely on air service to and from Prince Rupert.

Many of the points that the Councillor's made during the discussion provided a fairly robust argument to keep the station in operation, though those comments probably would have aided that cause had they been delivered much earlier in the timeline.

The move towards eliminating Flight Service options out of Prince Rupert first began in 2009, five years later, unless the City's letter writing campaign proves successful, it would appear that Nav Canada has put the finishing touches on that Closure plan.

You can review the discussion on the closure from our City Council Timeline feature or by way of the City's Video Archive, it starts at the 1 hour 46 minute mark and continues on through to 2 hours and 3 minutes.

For more on issues of note from Prince Rupert City Council see our archive page.
Posted by . at 1:09 PM