Port Highlights both physical and financial growth in Annual Report

Last week, the Prince Rupert Port Authority outlined the year that was for Port related developments, hosting a Public Meeting and releasing details of their 2013 Annual report.

Key among the review from Port of Prince Rupert President and CEO Don Krusel was the connection that Prince Rupert is providing not only in British Columbia, but across the continent and towards Asia.

The focus of the last weeks Annual meeting as a look at the progress of the Port in the last twelve months. From its financial momentum through the volume of existing products such as coal, lumber and containers that pass through the Port, to the introduction of the Westview Terminal production to the Port's exports listings. 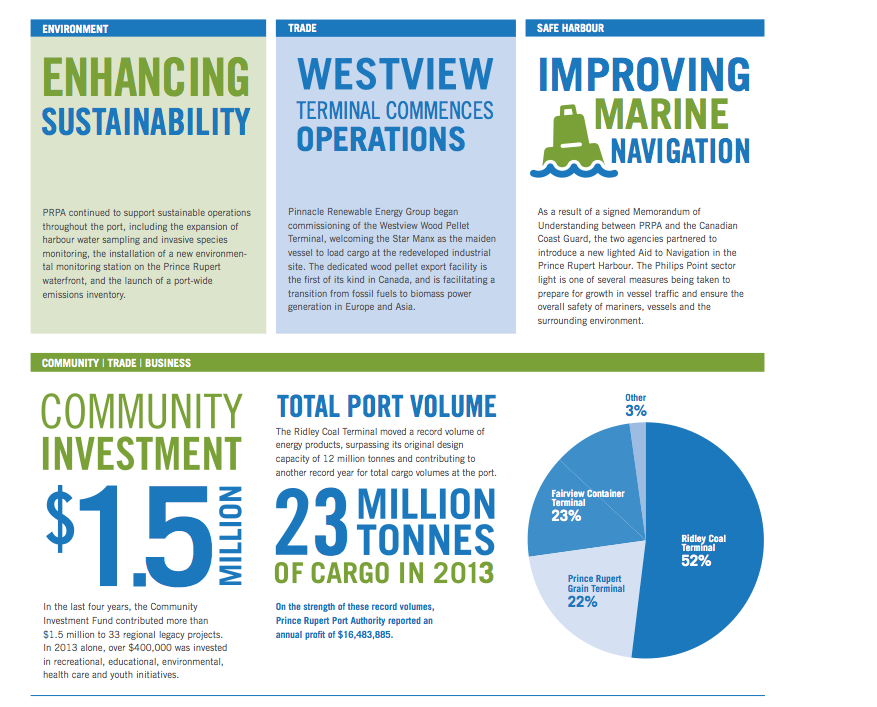 From those efforts the total port volume of Cargo for 2013 was recorded at 23 million tonnes, with the Prince Rupert Port Authority reporting an annual profit of over 16 million dollars.

As well as those ongoing ventures for the Port, the future is still very much on their mind.

As they outlined the progress of such projects as the Rail and Utility corridor and planned expansion of the Fairview Terminal, providing some background into the impact such developments continue to have on the community.

The Annual report provides for projections of increased capacity should future projects such as an off dock Container Yard and Logistics Park and the proposed LNG Terminal developments reach the completion phase of their planning.

All of those items are tied into the Port's Gateway 2020 vision plan.

Previously mentioned in the media last week, were plans of the Port Authority to create a bulk break port facility near Prince Rupert Grain on Ridley Island, break bulk is what the Fairview port was originally designed for, prior to its conversion for the import and export of container shipments.

The return of a break bulk option highlights the growing nature of industrial development of Northern British Columbia, making the Port of Prince Rupert a logistical receiving point for many of the major projects proposed for the Northern half of the province.

To gain a good understanding of what break bulk is and what may be ahead for the Port of Prince Rupert, this 2013 item from Canadian Shipping provides some helpful background into the service it could provide.

Of interest is the mention on page 11 of the Canadian Shipping item, which focuses on the potential for growth in break bulk options for Prince Rupert.

The announcement last week of the Ridley project, would seem to address some of that interest in re-establishing the break bulk options for the port for the first time since 2007.

One final note from the Annual report will be of interest to those that continue to wait for an announcement on the theme of the Canpotex terminal.

That much discussed, but yet to be delivered proposal is still on the Port Authority radar, with a mention in the Annual Report as still under consideration, with an estimated completion date still listed as sometime in 2017.

Though, a glance over towards Saskatchewan and the Canpotex website, doesn't suggest that any decision is imminent. Still the fact that it's included in the published Port report should help keep that particular industrial dream for Prince Rupert alive for a while yet.

Beyond the facts and figures of Transportation and Logistics, the Annual report also highlighted the Port's contributions to the community. Offering up a listing of some of the Port's involvement through its Community Investment Fund.

That program has delivered over 1.5 million dollars in capital funds for local projects over the last four years.

You can review the full report from this link from the Port Authority website.

For more items on Port related developments see our Archive page for recent and past items of interest.
Posted by . at 8:38 AM