BC Ferry issues of concern to Interior tourism officials 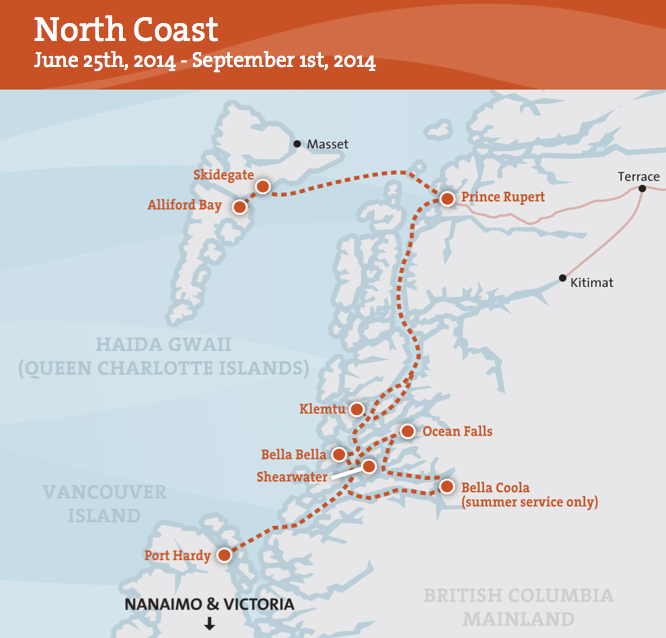 As the North Coast moves into the heart of the tourism season for 2014, concerns over the impact of the recent BC Ferry service cutbacks continue to remain high.

With tourism operators from Bella Coola to the North Coast and on to Haida Gwaii keeping an eye on the level of visitors to their regions.

The potential impact however has spread far beyond the Northern and coastal regions, in Williams Lake tourism advocates have offered up their voices in support of a revisit by the Government to their cuts, with the Discovery Coast service in particular of high concern to the interior communities.

Former Prince Rupert journalist Monica Lamb-Yorski, who now writes for the Williams Lake Tribune offers up some background on the impact of the cuts to the Discovery Coast service and how the efforts of those in Williams Lake to address the changes to that service have received little in the way of attention  from officials.

Those in the Tourism industry in the Chilcoltin region have outlined some of their concerns over the nature of the vessels in use on that service and the schedule that is currently in place, which they fear is driving away potential visitors to their region.

The Williams Lake and District chamber of Commerce recently joined the chorus of those across Northern British Columbia and Haida Gwaii, seeking to have BC Ferries reverse their decisions on Service Cuts until an adequate study on the economic impact on them can be done.

That was a theme of the Prince Rupert study from earlier this year, a report that was delivered to provincial officials.

Though much like the situation facing tourism advocates in the Chilcotin, there has been little in the way of movement from the province to be seen on the North Coast since that time.

You can review the full article from Ms. Lamb-Yorski here.

For more items on the theme of BC Ferries see our archive page.
Posted by . at 9:54 AM

Email ThisBlogThis!Share to TwitterShare to FacebookShare to Pinterest
Labels: BC Ferries cuts of concern in Chilcotin, June 2014