First comes the paperwork, then comes the construction equipment.

As we outlined on the blog back in March, at that time the Alaska Marine Highway System confirmed its intentions to continue to serve Prince Rupert well into this century with the announcement of a 50 year leas for their Fairview site.

And now, it appears that the proposal to reconstruct the existing marine facilities for the Alaska Marine Highway in Prince Rupert is moving forward.

Last week, the first steps towards that reconstruction plan took place as the Alaska Department of Transportation and Public Facilities provided their Environmental Management Plan for public review. 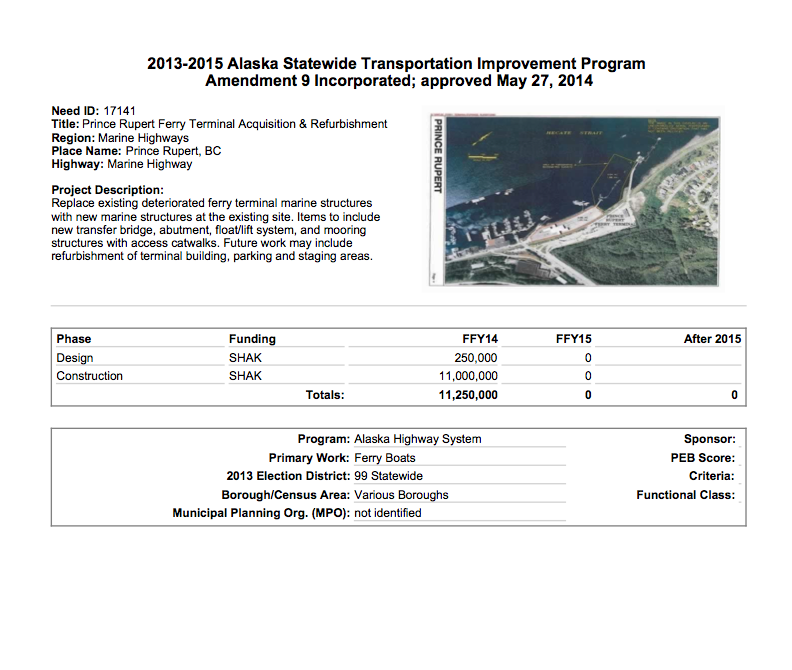 According to  information available on the Alaska Government site (scroll down to the AMHS projects section) , the Improvement program was approved on May 27th, putting in motion the process of replacement of the AMHS access point on the North Coast.

The project which see the demolition of the existing marine terminal structure, as well as piles and aging superstructure will provide for a much needed update to the AMHS facilities in the city, which once compete will provide for a new terminal and a significant investment in the Alaska Marine Highway presence on the North Coast.

The extensive Management plan outlines the scope of the project and even the impact that it could have on those west side residents of the the city that overlook the AMHS terminal at Fairview.

Included in the report is a review of some of the Mitigation Measures that will be put in place during the construction specific timeline of the project.

Fisheries Habitat, Invasive species, Archaeological Chance Find Management and other environmental concerns are all addressed in the plan, which charts the course ahead for the development of the AMHS terminal site.

Anticipated demolition work is expected to begin during the fall of 2014 or in the winter of 2014-15, according to the Management Plan that process will require a full shutdown of the terminal to take place for 1 to 3 months while work continues on key elements of the project.

How that impacts on AMHS service to the North Coast during that time frame has yet to be outlined.

The project is expected to be completed in the winter of 2015-16.

Contractors and sub-contract opportunities for the project have not yet been determined or selected by the Alaska Department of Transportation.

You can review the full package from the Prince Rupert Port Authority website.

For more on Ferry Transportation on the North Coast see our Archive page here.
Posted by . at 9:46 AM