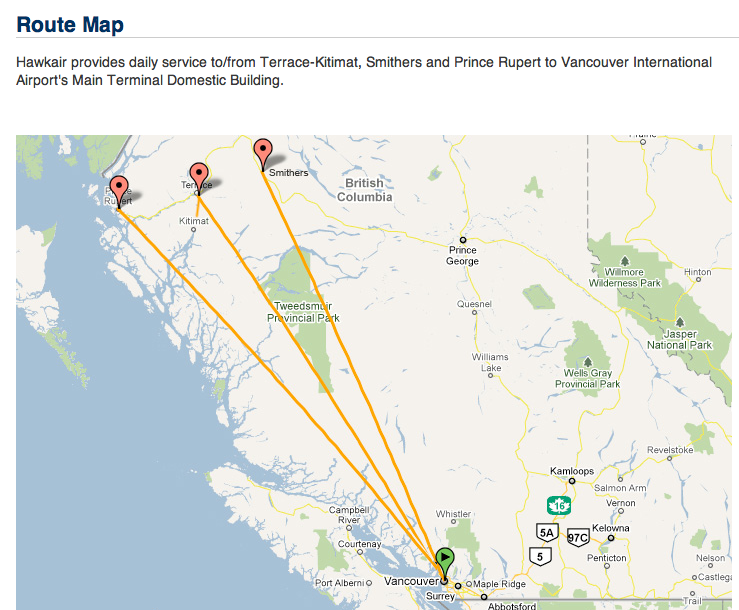 Prince Rupert travellers might have to get up a little earlier, but upcoming changes to the Hawkair schedule will most likely meet with the approval of North Coast residents.

After consultations with business users and studying the results of a recent survey of Hawkair passengers, the Northwest based airline is making a change to its Prince Rupert schedule.

As we outlined on the blog a few weeks ago, among other conversations, Hawkair sought the opinion of the community through a survey co-hosted by the Chamber of Commerce.

The survey sought the opinion of Prince Rupert residents on the topic of when local travellers wish to travel in and out of the city. Once the results were in and other input was considered, the Airline decided to shift its current mid-day flight to an early morning departure, with a return to Prince Rupert now to be later in the evening.

The announcement of the new schedule plan was released yesterday, providing more background on Hawkair's plans.

Hawkair has been part of Prince Rupert's travel planning for thirteen years, providing DeHavilland Dash 8 service to and from Vancouver.

The new flight schedule, which is to go into effect on August 5th,  will see Hawkair departing from Prince Rupert at 8 AM, making for a mid-morning arrival in Vancouver.

The daily return flight will leave Vancouver at 5:45 PM, arriving in Prince Rupert in the early evening.

The schedule change responds to a wish of Prince Rupert residents to have their travel plans start earlier in the day. Allowing for more time in Vancouver for business meetings, medical appointments and such, or for some travellers, providing for a better options of connecting flights to other locations.

You can learn more about Hawkair and their service to the Northwest from their website.
Posted by . at 9:03 AM

Email ThisBlogThis!Share to TwitterShare to FacebookShare to Pinterest
Labels: hawkair moves to morning flight out of Prince Rupert, June 2014