Highway 16 Closed East of Prince George due to Mudslide

Update: Highway 16 East of Prince George has been re-opened, with alternating traffic travelling on one lane through the mud slide area.

Incidents along Highway 16 this weekend have made the Yellowhead route one of the main contributors to the Drive BC advisory system over the last 48 hours.

As we outlined on the blog, Highway 16 was closed to traffic at Smithers overnight as emergency officials responded to a serious Motor Vehicle incident at Moricetown.  The highway was re-opened to one late, alternating traffic early Sunday morning. No details on the nature of the incident have been released as of yet.

In addition to the Smithers incident, a mudslide east of Prince George near Tete Jaune Cache has resulted in the closure of the highway to all traffic, Ministry of Highways and the local maintenance contractor are working to clear up the debris and assess the potential for future risk.

Ministry of Highways officials advised that the earliest prospect of its reopening is not until Monday morning. 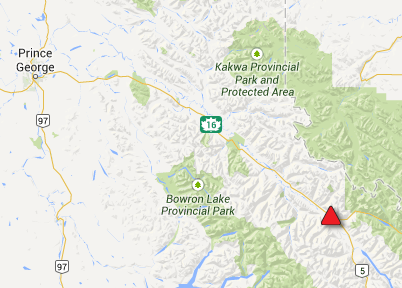 The only detours around that location involve a lengthy transit to the north of Prince George via the Pine Pass and Highway 97 North and through the Peace into Alberta.

More background on the mudslide can be found below:

Email ThisBlogThis!Share to TwitterShare to FacebookShare to Pinterest
Labels: Incidents on Highway 16 June 7 and 8