It could soon be, that the expression "everything old, is new again", gets a North Coast touch.

A major International Business media service is offering up a story this week, that suggests that should the Northern Enbridge Gateway project to Kitimat prove to be an unworkable prospect, there may be a fall back option.

With the suggestion that the energy company could consider a new attempt at a Pacific beachhead, with land north of Prince Rupert as it's potential "Plan B" shipment point.

All of that, is reviewed in this article from the Bloomberg Business website. The item also was the topic of this article in the Financial Post.

The main focus of their item on options for Enbridge is land that Enbridge now owns at Grassy Point.

Back in March, it was announced that Enbridge had purchased a parcel of land at Grassy Point north of Prince Rupert, at the time the energy company stated that they had no set plans for its development.

However, that parcel of the north coast as Bloomberg observes, could potentially be an answer to the ongoing struggle to deliver the Kitimat Terminal proposal.

Through the review, Bloomberg outlines some interesting points on that possibility, highlighting the aspects of such a development that Enbridge may wish to start the discussion with.

Ranging from the potential impact of the anticipated Gateway Ruling from the Federal Cabinet, to a look at what a potential Enbridge pipeline to Prince Rupert might look like.

As well the article outlines how such a change of plan might offer fewer hazards and that a selection of a location near Prince Rupert would be more accessible for marine traffic, offering up fewer concerns to navigation than the current Kitimat option.

Included in the overview of the fall back plan, is how the proposed pipeline would avoid the environmentally sensitive Skeena region.

With a nod to past concerns over any such development for the region, the Bloomberg review also provides a glimpse into some of the potential opposition that "Plan B" may receive.

Another intriguing aspect of the article is the observation that at the moment,  it's unclear if any change in the route would require a fresh regulatory review. With Enbridge perhaps able to ask for a variance consideration.

A procedural move which would leave it up to the National Energy Board to evaluate if a change in
route to Prince Rupert would require a new review. 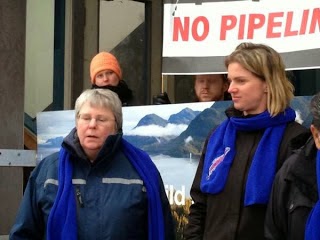 Considering the fall out over the Enbridge plans for Kitimat, it would seem that any proposal that would suggest any development of an oil export facility along the North Coast. is sure to be controversial.

Somehow, we have a feeling that whether the NEB asks for a review or not, those that have expressed their opposition to any form of shipments of oil from the North Coast will be offering their own opinions to the discussion should this proposal ever start to gain some steam.

You can find more items on Northern Gateway Enbridge from our archive page.

Email ThisBlogThis!Share to TwitterShare to FacebookShare to Pinterest
Labels: Bloomberg business on Enbridg'es Plan B