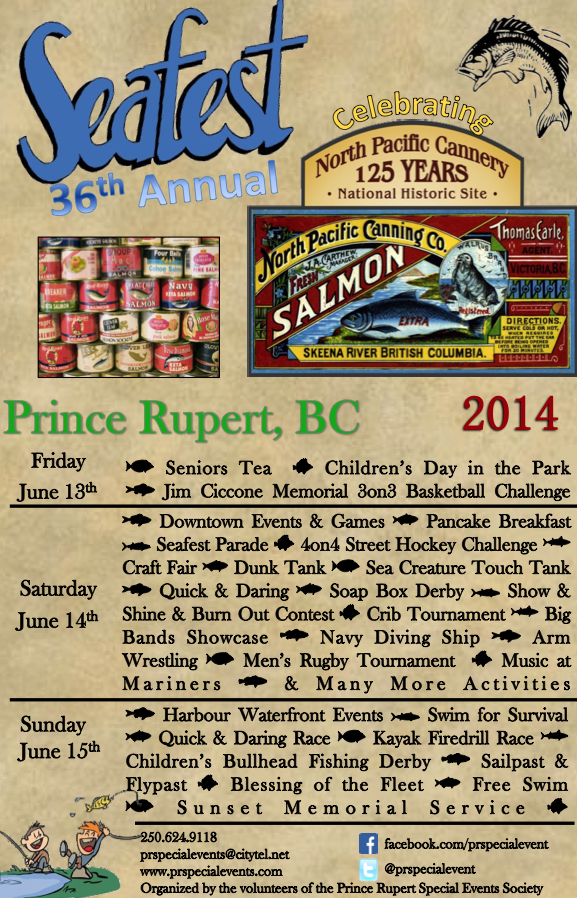 Prince Rupert's annual signal that summer is close arrives this weekend, as the city celebrates Seafest, the 36th Anniversary of the Community Festival that finds the downtown and waterfront areas the centre of all action on Saturday and Sunday.

This year's theme is one of Celebration of North Pacific Cannery's 125th Anniversary, highlighting the long attachment of the cannery life to the North Coast.

As part of the Seafest weekend, Port Edward's North Pacific Historical site is fully involved in this year's activities, both at the museum site and at Seafest events in Prince Rupert. (See here for a review of what North Pacific has planned for the weekend)

The three days of Seafest in Prince Rupert kick off on Friday with a number of activities to set the tone for the weekend, included in Friday's agenda are:

The start of the Seafest Slow pitch tournament at the Civic Centre fields, with games all weekend long leading up to Championship Sunday. Three on three basketball also makes use of the Civic Centre on Friday with court set up in the parking lot of the rec centre.

The Royal Canadian Navy pulls into port for the weekend with a Naval Display and tour of a diving tender part of the activities at the Atlin Terminal through until Sunday.

A Seniors Tea, concert from the Tsimshian Academy School Band, Seafest Window Decorating Contest, Children's Day in the Park at Mariner's Park and Artisan Showcase at the Lester Centre also make the list of things to do on Friday.

Seafest Saturday is of course about the parade which makes its familiar trek down 2nd Avenue and back up 3rd starting at 11 AM.

Once the parade is over, a full range of events and activities await Seafest crowds.

The day starts early with the 9th Annual 4 on 4 hockey challenge getting underway at 8 AM At Tim Horton's.

A Scavenger Hunt is planned with vouchers and coupons hidden around the downtown area, keep your eyes open, they could be anywhere.

Prince George will be well represented at this year's Seafest celebrations, Featuring a replica of the that city's iconic Mister PG, participation on Third Avenue from representatives of the Canada Winter Games to be hosted in Prince George in February and chance to take a ride on Prince George's famed Cottonwood Express train at the Rupert Square will all be part of Seafest Saturday.

The Telus booth offers much for participants, including the chance for Rupertites to vote for one of three Prince Rupert Charities, with the potential of a 10,000 donation there with your vote.

Rugby is on the pitch at Patullo Field at the Civic Centre, the Jim Ciccone memorial 3on3 Basketball challenge is on Third Avenue in front of Cook's Jewellers.  The Soap Box Derby, Part 1 of the Quick and Daring competition, Show and Shine, Wagon Rides and Arm Wrestling also return for another year.

The Vancouver Aquarium's North Coast initiative will be presenting Whales of the North Coast at the DFO parking lot, as well they will be providing a display of the Marine Debris Art Display by CHSS students.

Music fills the air in two locations on Seafest Saturday with Bandstand entertainment in front of City hall from 1 to 5 and Music at Mariner's Park from 7 PM to 9:30

The final day of Seafest is Waterfront Day, where the focus of most activities shifts to the Rotary Waterfront Park area, however there are a few items to explore directly above the waterfront site, as the Rupert Square hosts Prince George's Cottonwood Train for one more day, in addition to the train, Helijet is hosting a Display of a wide range of helicopters and a BC Ambulance service vehicle for tours.

CowBay is the place to be  from 9 AM to Noon as the Bullhead Seafest Derby takes place Sunday morning.

On the Waterfront, popular past events and some new additions mark the schedule of events for Seafest Sunday.

The Seafest Worship Celebration starts the morning off on the waterfront with a concert of contemporary Christian worship music.

The Jim Ciccone Memorial 3 on 3 Tournament Continues at the Waterfront Park parking lot.

The SailPast and FlyPast is scheduled for Noon, Watercraft Skill Demos take place at 12:30 and Blessing of the Fleet is set for 12:45.

Kayak Rides for Kids take place from Noon to 3:30 PM.

A number of land based activities and food booths can be found around the waterfront through the afternoon.

The weekend comes to a close with the Sunset Service from 6 to 7 at Mariner's Park, the dedication of plaques to be placed on the Memorial walls will take place as part of the Service.

You can learn more about all of those and a number of other events from the RupertReigns website, which has a full review of the three days of fun ahead.