Monday night was presentation night for the Australian based energy company Woodside, as John Litchfield, the Manager of Indigenous Affairs for the company outlined at what stage their proposed LNG development for Grassy Point is at and what kind of timeline the company was looking to follow in their early stages of review.

He opened his review of the company by providing some background on the work of Woodside in Australia where the company has been operating for over 60 years and operating LNG facilities across the country for over 25 years.

During the course of his twenty minute presentation, Mr. Litchfield provided a glimpse of the two options that the Australian company is considering for their parcel of land at Grassy Point that they are examining on land north of Prince Rupert near Lax Kw'alaams.

He outlined the nature of the agreement between Woodside and the Provincial Government, providing for a three year window to investigate the feasibility of developing any terminal project in the region.

The main focus of their initial review is to determine if it makes financial sense for the company to move forward with the project and that any decision to move on that prospect is a few years in the future. 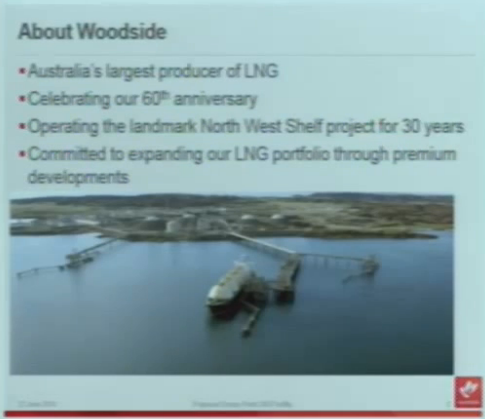 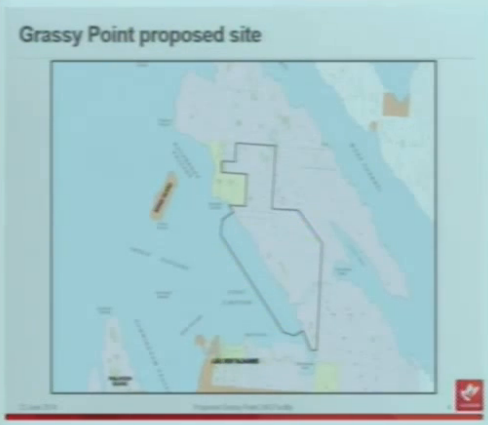 As for the actual proposals for Terminal development, Mr. Litchfield highlighted the two concepts that Woodside is reviewing for the site, should the project prove feasible.

One a on onshore facility and the other one which would be a floating terminal located offshore of Grassy Point. He offered up a bit of background on the differences between the two options.

The floating proposal would be constructed offshore and floated to the North Coast, requiring less of a construction work force to put it in place. Litchfield estimated that number of workers required on that proposal would only be in the range of 1,000 workers.

The onshore proposal would have a much larger impact on the region, requiring a much larger construction work force, numbering near 6,000 workers.

Both proposals would provide full time operational jobs numbering around 300 over the minimum 25 years of operation for the terminal. He also outlined some of the indirect employment opportunities associated to the operations of the terminal.

The theme of engagement in social investment was also reviewed, with Woodside using their work in Australia with aboriginal people as a template as to a potential path they would follow in British Columbia.

The timeline of the process moving forward was outlined, with the first of the Environmental Assessment engagement to be put in motion as early as July of this year, with a final Project Description to be delivered in the second half of 2014. 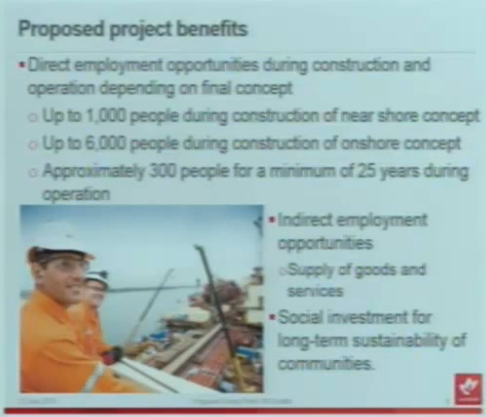 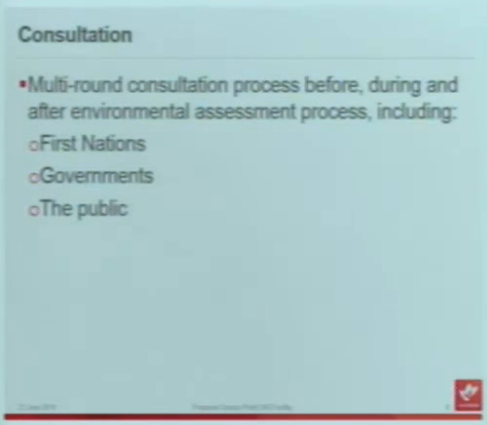 In closing he stressed their desire to engage in extensive consultation with First Nations, Governments and the public in the region.

Following the presentation, three Council members offered up some thoughts on the project with questions and suggestions for the Woodside representative.

Councillor Ashley led off the queries, outlining the nature of these developments tend to be those of development outside of the municipal boundaries, but impacting communities that act as service centres, wihtout tax benefits to the communities that host those services.

Mr. Litchfield outlined that it was an issue that Woodside would have to consider further, but that he was aware of the nature of the question of service agreements and that they are familiar with the idea of general land use agreements and how benefits need to be spread more broadly.

Councillor Thorkelson followed up on the theme of development of the project and where Woodside would see workers living during both the construction and permanent operational periods.

Mr. Litchfield returned to the two options they are considering and how they may factor into those numbers. He also highlighted the engagement that Woodside intends to develop with Aboriginal communities in the region.

Councillor Garon offered up some observations on the near shore version of the LNG terminal, calling attention to the nature of our occasional severe weather of the North Coast and the impact that may have on such a structure located off shore.

The Mayor closed the presentation with an inquiry as to whether Woodside would be setting up an office in the community to provide further review of their proposals as they move forward.

It all made for an interesting review,  Woodside however, would appear to be more of a long game proponent.

As Mr. Litchfield outlined for Council, that Woodside anticipates a three year window to examine the feasibility of their proposal, while any announcement of moving forward would appear to be a few years down the line just yet.

You can review more on their proposal from the City Council Video Archive, Mr. Litchfield starts his presentation at the twenty six minute mark, it continues through until the

For more background on the Woodside proposal, see our Industrial Development archive page for the project.

Those looking for more items of note from City Council can find them posted to our City Council Discussion Points page here.