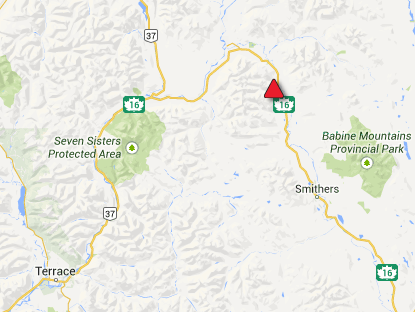 Smithers RCMP provided an update on Monday morning, outlining the details of regarding a two vehicle head on collision near Boulder Creek over the weekend, a motor vehicle incident which has resulted in four fatalities.

Shortly after 6:30 PM on Saturday evening, RCMP from Smithers and New Hazelton, as well as emergency responders  from New Hazelton responded to a report of the head on collision on the highway, with the accident scene not far from the Northwest community.

Upon arrival to the accident scene,  those in attendance found a Van and SUV had collided, resulting in four fatalities. Monday morning, it was outlined that two men aged 67 and 75 and two women aged 83 and 65 had been found deceased at the scene of the incident.

The North District Traffic Service and BC Coroner's Office will be conducting an investigation into Saturday evening's incident.

No further details on the investigation will be released at this time.

The Media release from the Smithers RCMP can be reviewed here.

Update: A Prince Rupert woman is listed among those that died in the crash. However, no names  have been released at this time by the RCMP or B. C. Coroners office.

June 10-- BC Coroners Service Identifies victims of motor vehicle incident
Posted by . at 11:26 AM