The prospect of yet another oil refinery proposal for the North Coast was revealed on Tuesday morning, as Pacific Future Energy announced plans for what they are calling the "greenest refinery in the world" to be placed somewhere on the North Coast.

The proposed development was outlined in a press release that provided some background on the 10 billion dollar bitumen refinery project.

"We believe this is an incredibly unique opportunity to build the greenest refinery in the world and there's no better place than BC,"... "Our pre-feasibility study has begun, which will analyze the economic, social and environmental aspects of the refinery and help to determine the prospective site and expect to launch our feasibility and regulatory process in the next 9-12 months." -- Samer Salameh, Executive Chairman of Pacific Future Energy.

The management team for the refinery proposal includes a number of businessmen with experience both globally and in British Columbia, led by Executive Chairman Samer F. Salameh, who manages new business devlelopment for Grupo Salinas, a multi billion dollar industrial conglomerate based in Mexico and operating in 11 countries of the Americas.

Also on the team is Executive Vice-President, Mark Marissen, who has in the past provided public consultation services to the Prince Rupert Port Authority (and as Black Press reminds us, is the ex-husband of Premier Christy Clark).

Other members of the six member Executive group have had experience with other energy proposals for the region.

The proposed refinery would be built in modules, with each capable of processing 200,000 barrels of bitumen per day.  The bitumen would be converted into gasoline, diesel, kerosene and other distillates.

As part of the launch of their proposal, the company outlined the nature  of the NZNC emissions technology that they intend to put in place in their refinery project.

A portion of their debut announcement addressed issues of First Nation consultation. With Pacific Future Energy providing an overview of the engagement process it intends to take with the First Nations of Northern British Columbia.

"From the very beginning, and every step of the way, our partnership with First Nations will ensure that we all benefit from traditional and ecological knowledge, while respecting their rights to full consultation and accommodation—all with the goal of shared prosperity and health for future generations,"-- Jeffrey Copenace, Vice-President Indigenous Partnership.

Also, included in the announcement of today was a review of their Commitment to British Columbians, a vision statement of sorts of what their project is about. 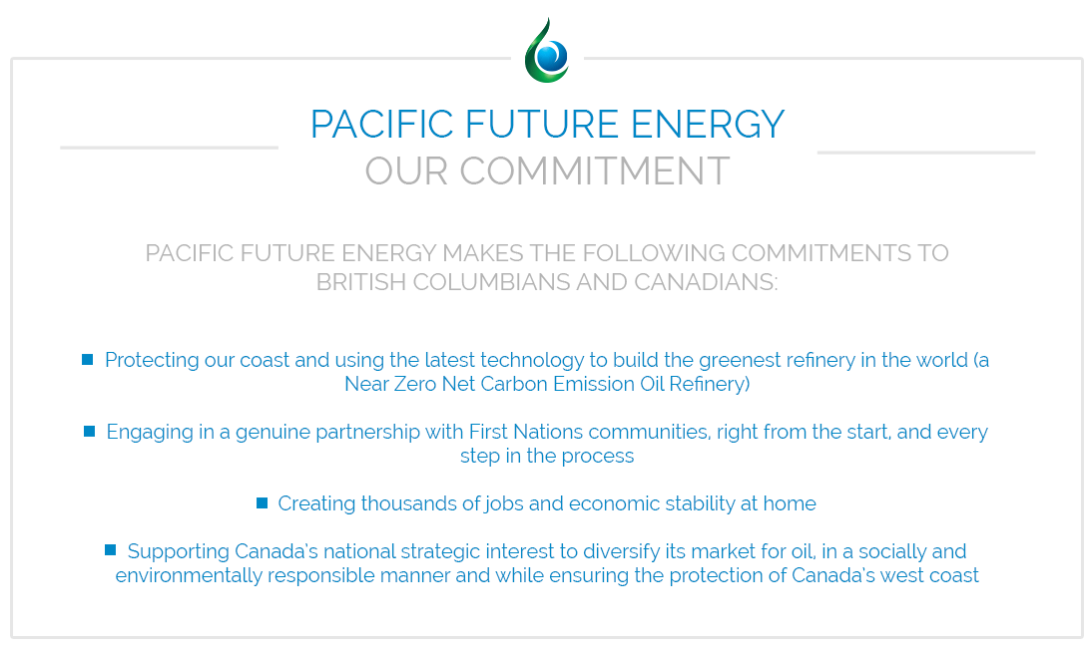 As for actual details and the scope of the development, not much else was revealed about the proposal. Other than the timeline that Pacific Future Energy will now start out on.

With a pre-feasibility study now underway to analyze the economic, social and environmental aspects of the refinery and help to determine the prospective site.

They plan to launch their feasibility and regulatory process sometime in the next 9-12 months.

Pacific Future Energy is just the latest proponent looking to deliver an oil refinery to the North Coast.

David Black was the first to propose such a project with his Kitimat Clean refinery project, which has yet to deliver any further steps of progress since it was first announced in 2012.

Residents of Northwest British Columbia will be quite interested to learn more on all of those proposals as the process moves forward, with Pacific Future's proposal one which will be of particular interest as North Coast residents await their site selection announcement.

You can review the full press release here, there is more on the Pacific Future Energy proposal available on their website.

As part of our efforts to provide background on many of the economic development projects of the region, we have created an archive page for future items of note on the Pacific Future Energy project which you can access here.

You can review more items on the growing number of proposals for oil refinery development in the Northwest from our Archive page.

Update:  Global BC reports that the proposed site will be somewhere near Prince Rupert, with three potential locations to be reviewed.
Posted by . at 10:55 AM

Email ThisBlogThis!Share to TwitterShare to FacebookShare to Pinterest
Labels: Pacific Future Energy Oil refinery proposal for North Coast of BC