The last of the large scale proposals for LNG development in Prince Rupert is officially on the shelf now, with word that Exxon/Mobil-Imperial Oil has decided to exit the British Columbia Environmental Assessment process related to what would have been a significant LNG terminal development at Tuck Inlet.

The decision of the multi-national oil company was announced Wednesday both through the BC Environmental Office website and that of WCC LNG, with no other details related to what led to their move towards abandonment of their Prince Rupert plans
. 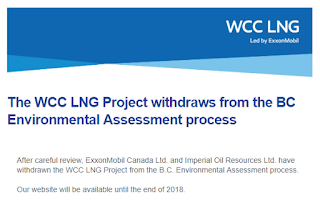 The last advisory from WCC LNG on their plans for Tuck inlet came in the spring , where the company noted that they were on a reduced pace towards their application, citing uncertain LNG market conditions and economic uncertainties they had closed their Prince Rupert office in late 2017.


The WCC LNG website will remain available until the end of this year.

Their arrival on the scene came about after negotiations with the City of Prince Rupert for WCCLNG for leasing options for the Tuck Inlet site, in November of 2014 the City indicated that eighteen million dollars could be directed towards the city's Legacy vehicle from the Exxon interest.

The enthusiasm of the time had the city indicating that there was a prospect of many, many more millions potentially to come if the project were to go ahead.

With the abandonment announcement from Exxon-Mobil, Prince Rupert now sports a record of 0 for 5 when it comes to the highest profile LNG proposals that had created some high anticipation four years ago, with BG Gas, Pacific Northwest LNG, Aurora LNG, Woodside and now WCC LNG having all decided to end their work towards development of an LNG terminal.

Of the five, the one that was the furthest along was the Pacific Northwest LNG project proposed for Lelu Island near Port Edward, the Malaysian energy giant Petronas announced the cancellation of the project in July of 2017.

From the ashes of their Prince Rupert planning, Petronas has since gone on to become a partner in the LNG Canada Terminal project in Kitimat.

Such was the nature of the heady days of the arrival of the LNG rush, that over the course of the summer of 2015, Mayor Lee Brain created what he called the LNG GO plan, a planning document that was crafted to assist the city with what had  been called the prospect of hyper accelerated growth for the region that would come with the potential development of the proposed projects.

Four years after it was introduced however, references to the Go Plan itself seem for the most part to have been purged from the city's website.

As time moved forward, the elements of the Go plan appear to have now morphed into the wider document known as the Hays 2.0 Plan.

As for the LNG GO Plan document, perhaps it's now sitting on a shelf in the Mayor's office, a spot which may in the end provide for the epitaph when it comes to all the excitement for an industry that never did quite get to go ...

A review of all of the now abandoned LNG projects once proposed for Prince Rupert can be found here.
Posted by . at 7:06 PM

Email ThisBlogThis!Share to TwitterShare to FacebookShare to Pinterest
Labels: Exxon exits BC environmental process for LNG project in Prince Rupert