Tracking underway, as Santa Claus makes his annual trip around the world and late evening rendezvous with Prince Rupert 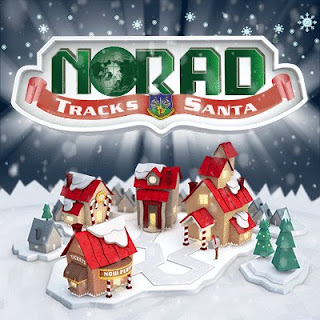 There's still a fair bit of time before North Coast Residents may hear the sleigh bells ringing  into the night and perhaps a glimpse of a famous red nose leading the way, but in many parts of the World the annual journey of Santa Claus is underway and the travels of Mr. Claus are being kept up to date by the Joint Canadian-American Air Command at NORAD.

What they do once he arrives in North America, as well as a large number of games, music and other features for those that wish to follow can be found from the NORAD TRACKS SANTA website which also will be providing for live tracking of Santa through the day.

The NORAD Tracks Santa Facebook page also has some behind the scenes glimpses as the staff on hand at the tracking Centre help to  keep the flight plan to its schedule.

NORAD put together a bit of a preview of the night leading up t Santa's lift off today.


As has been the case in the past, Royal Canadian Air Force  pilots out of Bagotville, Quebec will be the first to escort Santa into North American air space, changing off with their American counterparts for the journey into the USA, that handover will continue up and down the border as Santa makes the trek across the continent from East to West.

This years travels began a few hours ago in Eastern Russia, Australia and New Zealand to name a few of the stops to this point, it's a pretty long day for Santa and his support team down at the North Pole, one that won't be over until he makes stops in Northwest BC, Alaska and Hawaii before he returns to his workshop not far from the Arctic Circle.

As the journey towards North America continues we'll offer up some of the snapshots from NORAD below, giving North Coast followers updates on just how close that Santa and the reindeer are getting as they make their way to the area. 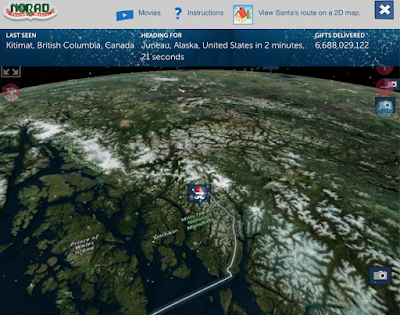 Santa travelled into Prince Rupert at 1:05 AM destined north for Ketchikan, Alaska and points beyond. Heard passing overhead just past the Westview Pellet Terminal was a joyous yell of "Merry Christmas to all and to all a Good Night"

The trip into the Northwest arrived just before 1AM as Santa made his first of the Northwest stops in Kitimat, Smithers and Terrace 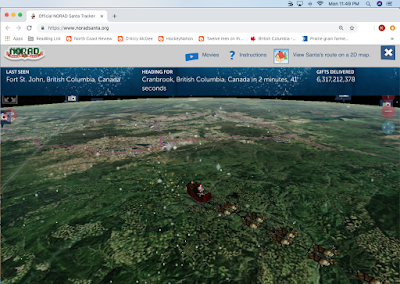 Heading towards midnight, Santa made his first entry into British Columbia, travelling North to South from Fort St. John to the Kootenays

10 PM Pacific and Chicago is Santa's kind of town

At the midnight hour in Ontario (9 PM in BC), Santa heads into Metro Toronto and the other large cities of Canada's most populous province

7PM and the first sighting of Santa over Canadian Airspace, with Newfoundland and Labrador, and the Atlantic provinces about to receive their annual visit.

The 6PM Satellite and Radar fixes found Santa over some familiar terrain, with  the Jolly Old Elf refuelling in Greenland.


5 PM was Salsa time for Santa with a stop in Rio De Janeiro, Brazil
and the rest of eastern South America.

Just past 4 PM and Santa's in England to visit the Queen and everyone else from Edinburgh south, he also skips over the channel to make Stops in Belfast, Derry and Dublin to name a few calls on the night

2PM and Santa is stopping for a cappuccino in Italia

1PM and Santa was spotted over the Pyramids of Egypt

10 AM Santa was travelling through Russian airspace

Lifting off from the North Pole