In Special Session of Council, City's Trade and Business regulations amended to allow for cannabis sales in Prince Rupert

A special council session, which was called as part of Monday night's Council deliberations on everything cannabis, has put the city's stamp on new regulations for the introduction of retail cannabis stores in the community.

The additional session came following the extensive work of Monday which included a public hearing on the zoning changes required to introduce the cannabis retail zones.

Wednesday, it took less than five minutes for Mayor Lee Brain and those Council members in attendance to move forward with the final reading and acceptance of the amendments to the Trade and Business Bylaw.

The vote to pass the amendments was preceded by a short Public Meeting, which was sparsely attended, with only business owner John Marogna in attendance to make one inquiry related to the details towards the licensing system that the City will put in place and how the application process will work.

Of concern to Mr. Marogna was the distance between the commercial zone that will allow between cannabis sales and residential areas of the city. He was advised that area was of the domain of the province which outlines those distances.

The lack of public participation may have been attributed to the short notice provided for the Special Session and the lack of attention it received from the more engaged of Council members and their Social media streams.

The city did cover off the bare minimum level of notification required for the meeting, ensuring that it was noted on the City's website, as well as through the City's Facebook page.

We also made note of the meeting as part of our Council Timeline coverage of Monday night.

The city however did not make use of their new community app program, with no advisory posted to the system which delivers civic advisories to our cel phones and tablets.

The topic also did not gain much attention from the social media streams of the Mayor, Councillor Mirau or Councillor Cunningham, the three most dedicated users of their social media stream by way of their political Facebook pages. Forums which often feature items of note on Council activities, though in this instance there was no mention of the Public meeting or Special Session of Wednesday.

As for the Trade and Business bylaw, once reintroduced to the Special Council session it was passed without any comments from those council members in attendance.

With the vote to move forward with the Bylaw provisions, the path would now seem clear for the application process to begin and prospective retail operators to seek their business licences, providing they meet all the proper qualifications.

The amendment put in place the schedule of fees for the licence: with the city's initial application fee has been set at $5,000 dollars, with the annual renewal fee listed at $2,500

You can review the new Bylaw provisions below: 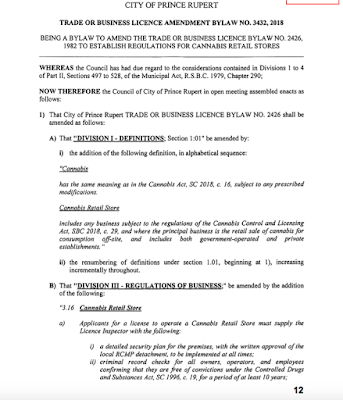 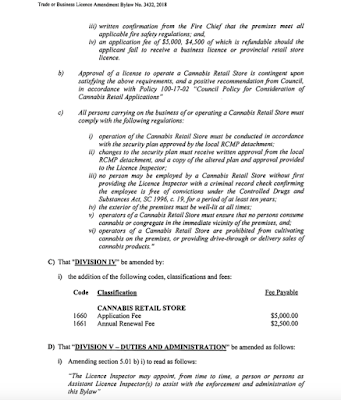 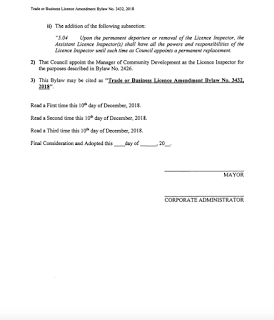 While they were in session, Council also addressed a late addition to the Agenda provided by Mayor Brain, which was to discuss a new grant opportunity through UBCM towards community Daycare options.

So far the City has not placed the video of the Special Council session of Wednesday evening into their You Tube Video Archive.

Email ThisBlogThis!Share to TwitterShare to FacebookShare to Pinterest
Labels: City amends Trade and business licence process to include cannabis retail