With a reduced bench on the weekend, the Prince Rupert Rampage took a split on the Friday/Saturday schedule, with a win in Kitimat and a tough loss in Terrace, the games making for their last bit of competitive action until midway through January.

The Friday night match up found the Rampage in Kitimat as they took on the Ice Demons at Tamitik, the Rhinos made it their eighth win of the season with a 5-2 victory over a Kitimat side which has had strong efforts through the year, but haven't yet been able to deliver a win by games end.

That inability to finish strong played into the Ice Demon loss on Friday as the Rampage exploded off the bench in the third period to break the 1-1 tie with four goals, surrendering only one in the final frame for the victory.

Saturday it was on to Terrace and a showdown with their Northwest rivals the River Kings, and as it seems to be when the two teams get together the scoring was tight and the physical play prevalent.

The teams traded goals in the first period with Michael Lynch picking up the Rhinos opening goal with an assist by Judd Repole late in the frame, sending the teams into the dressing room tied at one.

Period Two provided for no scoring but plenty of rough stuff, with eighteen minutes of penalties assessed the majority of them to River King players for a range of offences, though the Terrace skates were able to hold off the Rampage power play opportunities to leave the teams knotted at one heading to the third.

The Rampage jumped out to two goal lead before the River Kings could answer, with Cole Atchison picking up a goal in the first minute of play assisted by Jacob Santurbano and Jared Meers.

Eleven minutes later Kory Movold was on the scoreboard with assists for Meers and Santurbano.

With a 3 -1 lead heading into the final four minutes the River Kings launched a flurry of offensive zone incursions, scoring at the sixteen minute mark and again one minute later, the twin goals bringing things even again and sending the two teams into an Overtime period.

The River Kings did not keep the home folks waiting too long to deliver their victory with Austin Turner netting the game winning marker at just thirty six seconds into the extra frame. The victory gave Jared Rathjen the win in the nets having faced 27 shots on the night.

Keano Wilson was tapped for the loss for the Rampage, turning aside 18 of the 22 shots directed his way.

While the second period was the most active for the referees, the first and third periods were a tad tamer, overall the Rampage were assessed 12 minutes of time in the box on six penalties, while the River Kings faced 20 minutes of time served on 10 infractions for the night.

The full summary of Saturday night's match up can be reviewed here.

Saturday's game sends the Rampage on to the Christmas break with a record of 8 wins, 4 l losses, they also face the prospect of a one month break from competitive action with their first game of 2019 set for  Friday January 18th when they travel to Kitimat.

That will launch a hectic final two weeks of the regular season for the Rampage, with four games in total between January 18 and the final day of the season of January 27th.

After travelling to Kitimat, the rest of the month is all home dates and looks as follows:

Saturday January 19 at home with Terrace River Kings in town.

Saturday January 26 at home with Williams Lake Stampeders in town.

Sunday, January 27 at home with Quesnel Kangaroos in town.

Before the turn their attention towards the push towards playoff seedings, the Rampage will shift to a more relaxed mode, hosting their annual New Years Eve Party this year taking place at the Nisga'a Hall.

Tickets to Ring in the New Year with the Rhinos are 50 dollars with cocktails set for 6:30, Dinner at 7:30 and the countdown to 2019 to carry on into the early hours.  It's a nineteen year plus event and ID will be required for those planning to attend. 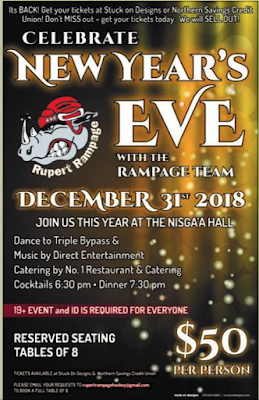 Find out more about their New year's Plans and other notes from the Rampage from their Facebook page here.

A look at the season so far can be reviewed from our Results page here, while a wider overview of CIHL notes for 2018-19 can be found from our archive page.

Email ThisBlogThis!Share to TwitterShare to FacebookShare to Pinterest
Labels: lose in Terrace head to Christmas break, Rampage win in Kitimat