The next stage for the Liberal governments Oil Tanker Ban bill C-48 will see members of the Canadian Senate take the topic to the committee stage, with the proposed legislation from the House of Commons assigned to the Transport and Communications Committee on December 11th.

The move to the committee stage comes after the Senate gave the Bill its Second reading earlier that same day.

When the committee next meets is still to be determined, with the Senate Calendar indicating that no session of the Transport and Communications Committee is scheduled at this time.

The Senate itself will wrap up its work for 2018 on the 21st and isn't expected to return to session until the end of January.

Part of that lengthy break is due to the Christmas/New Years holiday, as well as the need to relocate, with the Senate destined for a temporary location (for the next ten years) as the Centre Block on Parliament Hill undergoes extensive renovations.

The wheels of good governance do seem to move somewhat slow in Ottawa though, the bill from the House of Commons was delivered to the Senate back in May, and as 2018 begins to wind down, it's still far from getting approved by the Upper Chamber.

When they return to their deliberations the Senators will have no shortage of views to consider on the issue. With both sides of the Tanker moratorium debate recently in the nations capital to share their opinions and push for the Senators to consider their concerns prior to moving forward with the Legislation.

Those in support of the moratorium met with Federal representative in early December, led by Chief Marilyn Slett of the Heiltsuk First Nation and President of the Coastal First Nations, who have been taking the lead on the call to move the legislation forward.

They met with members of the Senate to reinforce the federal government's commitment to passing the Act and urged Senators to support the moratorium as it has been delivered to the upper chamber.

In a statement from earlier this Month, a number of First Nations representatives including former Lax Kw'alaams Mayor Gary Reece outlined the importance of the proposed Bill to ban tanker traffic in the waters of the North  and Central Coast.

“Lax Kw’alaams has the largest fishing fleet on the coast and a state-of-the-art cannery,”  ...  “We are not willing to trade our marine economy for a boom-and-bust industry.” -- Garry Reece of the Allied Tribes of  Lax Kw'alaams and former mayor of that community

“We are all witnessing worldwide drought, floods, fires and storms ... The Senate must seize a rare opportunity to help stem the tide of an otherwise deteriorating situation.” -- Haida Hereditary Chief Gidansda (Guujaaw).

There is however  some support to be found across Northern British Columbia for a lifting of the moratorium, much of it related to plans from Eagle Spirit Energy Holdings to build a pipeline from Alberta to Grassy Point near Lax Kw'alaams, where an oil shipment terminal would be built to transport oil to Asian ports.

Those supporters had some time to bend a few ears of the Senators earlier this week as they arrived in Ottawa to make a call for the ban to be abandoned or modified.

We made note of the push from supporters of the Eagle Spirit plan back in September, when Eagle Spirit President Calvin Helin observed that his group had put together a growing list of First Nations leaders to lend their support and names towards the project.

The latest quest towards the scaling back or elimination of the oil tanker moratorium comes as Alberta increases the pressure on the Federal government to find ways to get Alberta oil to world markets. 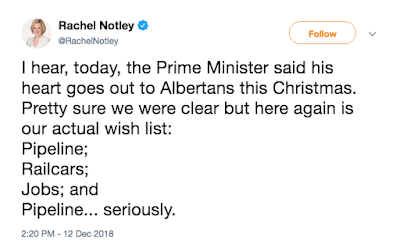 Mr. Helin's company is not the only group looking to have the moratorium ban cancelled, the Lax Kw'allams First Nation currently led by his brother John, has taken the issue to court, filing papers at the Prince Rupert court house back in March.

For more background on the Eagle Spirt plans see our archive page here.

More items of note related to the work of federal politicians in Ottawa can be found from our political portal D'Arcy McGee.
Posted by . at 11:01 AM

Email ThisBlogThis!Share to TwitterShare to FacebookShare to Pinterest
Labels: Oil Moratorium plans now to be studied by Senate committee