A week of mixed messages on resources from Lax Kw'alaams

The last seven days have provided for a pair of announcements related to a couple of resource issues from the north side of Tuck inlet, and from it all, there appears to be a current of many different views on how the community should explore resource development issues.

That as a court challenge which has now come to an end, as well as plans for an oil shipment pipeline and terminal on the North Coast, all put the community of Lax Kw'alaams in the spotlight for part of this week.

The week started with a statement from a group of hereditary leaders from the North Coast First Nation, which declared their full support for the federal government's proposed oil tanker ban.

Their comments taking aim at recent statements from Eagle Spirit Energy and its plan for a pipeline and oil terminal project, and Eagle Spirt's intention pursue a court challenge on the legality of the Federal moratorium.

In the Tuesday statement  the hereditary leaders observed that they have never been consulted by Eagle Spirit and have never agreed to support a dangerous project that threatens their indigenous rights and traditional territory.

They further note that along with their support for the oil tanker ban, that Eagle Spirit has never consulted the rightful title holders of Grassy Point, and they have never given permission for the Chief's Council to speak on their behalf.

The Federal Government introduced their plans for an oil tanker moratorium back in May of 2017. However, the proponents for the oil terminal for the North Coast took issue with the planned moratorium immediately following the roll out of the plan.

They have continued on with that opposition over the course of the last year, frequently citing a lack of a consultation by the Federal government and the presence of outside funding by environmental groups as part of their approach.

The group recently launched a Go Fund Me page to raise funds to launch a challenge against the Federal Government's moratorium plans.

Eagle Spirit Energy had been making use of a January 24th statement from a group they have described as the Chief's Council to push forward with their momentum for a proposed Oil shipment terminal on the North Coast.

One  potential site for such a type of industrial venture, which has been suggested in the past has been at Grassy Point near Lax Kw'alaams. Most recently it had been identified as a possible location for an LNG terminal. 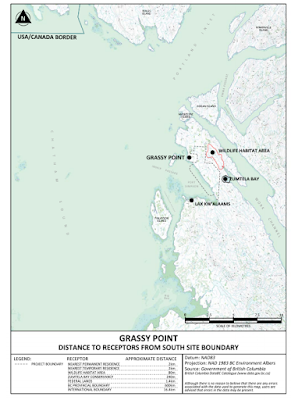 In early February we took note of the latest notes on that project, with Calvin Helin from Eagle Spirit Energy observing of a Plan B that the energy company has in mind, should their plans in BC not develop as hoped, with a proposal for an Oil shipment terminal near Hyder Alaska.

For its part, the elected Lax Kw'alaams Band Council, led by Mayor John Helin, hasn't had much to say about the ongoing discussion on potential oil terminal development or tanker moratoriums, with no background notes for their community, or those of neighbouring communities, released through any of their information portals of the Band Council website or Facebook page

As this week comes to an end, another resource related  issue had popped back up on the radar, with the Federal Court of Appeal dismissing a case related to the once proposed LNG terminal at Lelu Island.

Donald Wesley, a hereditary leader of the Lax Kw'alaams Nation known as Yahaan had brought the notice of appeal to the court in the fall of 2017, following the announcement of the cancellation of the proposed LNG terminal.

Mr. Wesley who had set up the protest camp on Lelu Island in August of 2015, had launched his appeal las fall with the goal being that the Island would remain free of any possible use related to the LNG industry.

Both his camp and his court challenges appeared to put Mr. Wesley and his group at odds with the elected Band Council in Lax Kw'alaams.

In February of 2017, those officials had signed a number of benefits agreements with the Province of British Columbia and Pacific NorthWest LNG related to the proposed development for Lelu Island.


As part of the decision to dismiss the application for a judicial review, the court called Mr. Wesley's quest moot, as the project was no longer moving forward, with no indication that there were any plans for Pacific Northwest LNG/Petronas to reverse that decision.

In a report on the court case, the Globe and Mail's Brent Jang notes that one of the respondents to the appeal court was Lax Kw'alaams Mayor John Helin, who had moved for dismissal for mootness as there was no longer a live dispute between the parties.

Mr.Wesley  (Yahaan) has also faced some significant push back from other members of the Lax Kw'alaams Community, with a number of hereditary chiefs having stated that he should not be recognized as a representative of the Gitwilgyoots.

That dispute will  most likely continue to make for an element of the discussion, framing the backdrop to any plans the Lax Kw'alaams Band may have when it comes to resource development.

You can review the lengthy list of notes related to the now cancelled Pacific NorthWest LNG project from our archive here.

More items of note from our archive on Lax Kw'alaams can be reviewed here.


To return to the most recent blog posting of the day, click here.
Posted by . at 12:24 PM