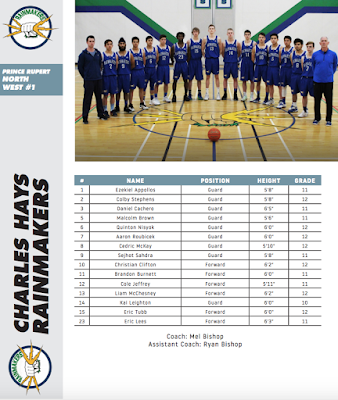 The Charles Hays Rainmakers bounced back from their disappointment following a hard fought loss on Friday evening to deliver two more strong efforts to bring a wrap to their 2018 Provincials experience.

The week of tournament play began with a Game one victory over RC Palmer on Wednesday,  the Makers coming out fast and holding off the occasional push from the Richmond team, gaining the positive result of 69-43 which moved  Charles Hays into Quarter Final play.

The Road to the provincial banner however ran into a solid wall of defence from North Vancouver, as the Seycove Seahawks shut down the Rainmaker attack for much of the day, including a strong late game push, as the North Van team claimed the semi final berth with a 91-80 victory on Thursday over Charles Hays.

That result shifted the Rainmakers into placement round mode, with their next two games of Friday and Saturday similar in nature, though  featuring different in results.

Friday the Charles Hays squad took on Shawnigan Lake in a highly energetic and spirited affair, which saw the two teams exchange baskets in frantic play. It was battle which never really saw one team take control of the game, making for wild last few minutes of play before Shawnigan Lake would finally claim the victory of 60-56.

Saturday found the Rainmakers up against Vernon's Clarence Fulton with the 7th/8th place finish the focus for the two teams. In a game that was quite similar in play to Friday's match up, the two teams for the most part exchanged baskets for the full stretch of the 40 minutes on the court with neither team able to pull away for any extended period of time.

The Rainmakers finally putting some distance between themselves and the Vernon squad in the final five minutes of play, driving home to the 62 to 52 win and a placement of 7th in the sixteen team tournament. 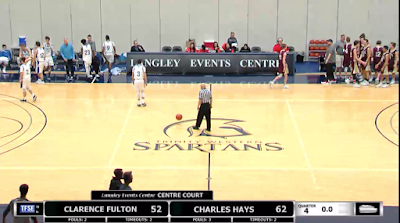 As for the AA Championship for 2018, the top seed Brentwood College took on the King George Dragons in the tourney finale, and the highly touted Mill Bay squad from Vancouver Island lived up to their reputation.

As the Championship game move on into the second quarter, Brentwood began to dominate much of the play, claiming the banner with a 91 to 53 victory over the Surrey based Dragons.

In other Tournament Action. the Bulkley Valley Christian School claimed a second place finish in the Single A tournament, edged out by Kelowna's Heritage Christian in Saturdays Championship game.

The complete list of results for all three Northwest teams can be found on our Tournament archive page.

Former Charles Hays teacher Brian Cameron was at the Langley Events Centre for Saturday's Rainmaker game with Clarence Fulton, he has kindly offered up some of his photographic work from the final day of play.

Some of the shots from Saturday can be found below click on the images to enlarge:

For more of Cameron's photos and other notes on Charles Hays Sports see the CHSS twitter feed.

Further items of interest on Rainmaker Sports are available on our archive page.

Email ThisBlogThis!Share to TwitterShare to FacebookShare to Pinterest
Labels: Rainmaker tournament wrap up