With the City of Prince Rupert operating under guidelines on development that are three decades old, the City Planning Department has been busy working out the details on an update to the community's Development Procedures Bylaw, providing Council with a look at the final result on Monday.

City Planner Zeno Krekic took the Council members through the elements of the final document, something which they have had some input on through its draft stage.

As he delivered his report to Council on Monday evening, Mr. Krekic noted that the updated Development Procedures bylaw will provide for more clarity and certainty with respect to the process of applications in amending Land use regulations or applying for land development permits. 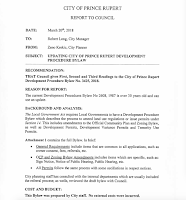 The new guidelines for developers feature a few revisions when it comes to General Application requirements, work on the Official Community Plan and Zoning Amendment provisions and the permitting and schedule of fees and payments categories.

One of the new notes that developers will wish to make note of, is a new provision of a six moth time limit to advise the City of their intent to move forward with their development plans.

That comes with a Lapse of Application requirement now in place, which will see the City close any applications should the applicant not advise them of their plans in that six month period.

The provision could be an important addition to the requirements, considering the vast number of development approvals that were made by Council over the last three years, that have yet to see any form of development take place.

Of the eight segments that were under review, the one element that seems to have been raised the most concern was related to developing a site profile and checklist process when it comes to Environmental Guidance on Contaminated Lands.

The requirements of the Contaminated sites passage caught the eye of Councillor Blair Mirau, who expressed a range of areas of concern, notably suggesting that he believed that the City might be taking on tasks that it is not required to do.

"From my perspective the province doesn't fund us, or give us the resources we need to deal with that stuff on the ground, and if they did, I'd be perfectly comfortable trying to do that for them, but without those resources supplied, I feel like we're taking on more than we need to in that regard"  --- Councillor Mirau on a section of the new City policies on development.

Further discussion with Mr. Krekic on that theme allayed some of those concerns, with the City Planner also noting that some of Mr. Mirau's concerns over what the city requires funding for should be taken up with senior levels of government through the UBCM.

Mr. Mirau would return to the theme of site reviews later in the discussion, seeking a bit more clarification on the subject and asking for the opinion of the rest of council on it.

Mr. Krekic outlined some of the past practices of Council through the years, while the Mayor noted that the default of the city would be to send it to the Ministry of Environment to check and that the new wording provides the City with the flexibility to that, adding that Council should leave the wording as it is.

Councillor Mirau would also recommend some changes to language when it comes to requesting applicants to appear at Council in pre application meetings.

Councillor Cunningham also had some notes to review on the document, with some of his focus on a question as to which process the city will follow for those developments currently in the system and how Council would be addressing those.

Mr. Krekic noted that while the old provisions will remain in place, he will be contacting those that are outstanding to try and determine their intents within six months.

For those still working their way through the city's development process the old rules that have served the community for thirty years will remain in place, the new document to be in effect for any new developments that may come through the planning office doors.

Councillor Cunningham also expressed some concern over language that could see new projects slip through cracks and sought out some assurances that won't be the case with the new procedures, recommending for a slight change in the language to ensure Council is kept up to date on plans.

"What I don't want to see is a small to medium project slip through the boards, and we hear about it after the fact, which sometimes comes up, and we don't know anything about it because it never got to this level" -- Councillor Barry Cunningham

Councillor Mirau then suggested that Mr. Cunningham's provision be put in place for proposed developments over 100,000 dollars.

With Council providing for first, second and third readings on Monday, the revisions are well on their way to being adopted and put into motion.

The full discussion can be found on the City's Video Archive page, staring at the 60 minute mark.

You can review the entire document from the City's Agenda package from Monday evening's Regular Council session for March 26th, the Report and Revisions to fees and schedules starts on page 17.

Notes related to development on the North Coast can be found through our Infrastructure and Major planning archive as well as our Housing archive here.

A more expansion look at many of the topics raised at Prince Rupert City Council can be found on our Council Discussion page.

To return to the most recent blog posting of the day, click here.
Posted by . at 9:26 AM