Nelson Kinney, the Dean of Prince Rupert City Council passes away at 77

Tributes flooded social media through much of Saturday, as word quickly spread of the passing at 77 years of Nelson Kinney, an iconic Rupertite, who served with distinction on City Council for 16 years.

"The fabric of the community, a man who always knew what was happening, someone who treated everyone equally, such a loss to the community"

Those are just a small sample of a lengthy list of observations on the life of the popular and long serving council member from Saturday, as Prince Rupert residents took a few moments to recount their favourite moments with the man many just knew as Nelson.

Mr. Kinney was first elected to a City Council seat in 2002 and quickly built his reputation at City Hall as a fierce defender for Seniors issues, as well as a force for themes on health, recreation and economic development in the community.

A transplant from the Lower Mainland, Mr. Kinney arrived in the city in 1957 and quickly became active in a number of sports and community causes around the city, building relationships across Prince Rupert that would eventually lead him to direct his energies to service to his adopted home town.

It was from his work at the city's hair salons, however, both as an employee and eventual owner, that Mr. Kinney would channel the current of the community and enter the political arena, taking the issues and concerns of his clients, or those who just stopped in to chat and turn them into themes for follow up for Council members every two weeks.

Of high concern always for the popular council member were issues related to the city's seniors and elders, with Mr. Kinney a passionate advocate for those in their golden years, urging council to ensure that their needs were taken care of.

He was one of the guiding hands to ensure that the first phase of the Fraser Street rebuild project started at the Seniors Centre end of the street, ensuring that the area around Grenville Court was finally taken care of after many years of delays.

His passion for Seniors issues also found him, along with then Councillor Briglio to be among the fiercest advocates for the New Acropolis Manor, as well as the introduction of the Summit Residences and this past year he spoke with much enthusiasm for a pair of Seniors residence projects that have been approved by City Council.

He also spoke frequently about the need to remain vigilant when it comes to Health Care Services in the community, to ensure that residents of the North Coast continued to receive quality care and to not let services begin to slide away from the community.

And while he was well into his own Senior years as he travelled through his time on Council, he would also champion youth in the community, often working to provide city services for youth at the city's recreation facilities.

Once in the council chamber, Mr. Kinney would prove to be a formidable politician, re-elected in consecutive council elections from 2005 to 2014, this current term was to be his last in service to the community, with the council member preparing to step aside from public life with this fall's civic elections.

With a few hospital stays  in recents years, Mr. Kinney had missed a few council sessions over the last year or so, yet remained focused on his work for those that he served on Council, most recently attending a Regional District session of Friday evening, prior to his passing on Saturday.

Arrangements to celebrate his life have yet to be made and will be announced to the public at a later date.

Mayor Lee Brain shared word of the councillor's passing with a Facebook posting on Saturday morning, providing for the forum of condolence for a community shocked with the news. 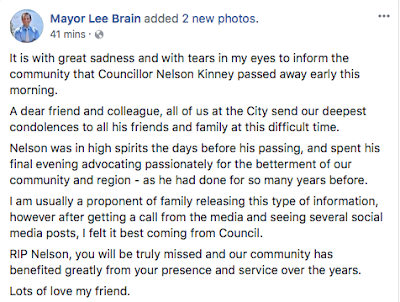 Fellow Council member Blair Mirau also provided for a tribute on Saturday, noting of the many contributions that the councillor made over his years of service. 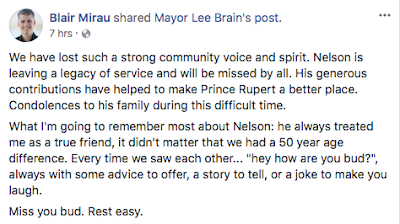 From those comments, some of Mr, Kinney's former council members offered their comments, to name a few among them were comments from former Mayor Herb Pond, and former councillors Tony Briglio amd Gina Garon, with all noting that his influence in the community came from much more than just his time on council, but through his  tireless work on behalf of the community.

Port Edward Council James Brown also offered up a glimpse of the work ethic and love of community that was the mark of Councillor Kinney,

A mixture of those that knew him best, along with those who just had a handful of exchanges with him over the years, have taken advantage of the Facebook post from Mayor Brain to share their remembrances and to offer condolences at word of Councillor Kinney's passing.

You can explore more of the tributes and share your own through this link to Mayor Brain's original post of Saturday morning.


To view the most recent blog posting of the day, click here.
Posted by . at 3:00 AM

Email ThisBlogThis!Share to TwitterShare to FacebookShare to Pinterest
Labels: The passing of Nelson Kinney