The state of housing stock is back on the radar in Prince Rupert, thanks to last week's notes out of School District 52 and the prospect of the Board Chair set to deliver a letter of disappointment to the City.

That correspondence related to a situation which has seen the proposed developer of a large scale development of the Kanata School lands for housing walking away from the deal.

With the Bryton Group now officially turning away from the proposed Kanata development, it has once again put the focus on the rather limited success so far for this Council of delivering on their ambitions for affordable housing units in the community.

As we outlined on the blog last week, the School District called attention to the issue as part of their March 6th School District meeting, setting the stage for some push back on the theme from one City Council member.

In response to the Kanata issue, Councillor Blair Mirau made use of his Facebook page to outline his disappointment in the School District's view that the City may be responsible for the developer walking away from the project.

The Councillor also used his social media stream to  showcase some of the numbers that the City has promoted when it comes to approvals for property development in the community, noting how Council had approved 315 new residential units for development. 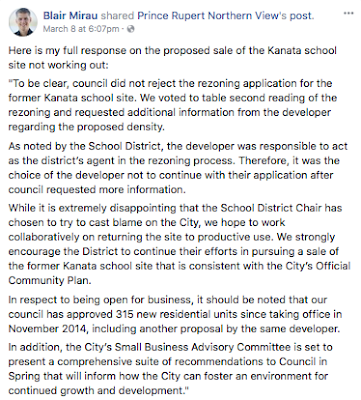 As the Councillor would quickly discover through the comments portion of his post , those who read his Facebook notes, also have taken some time to look around town and noted that of those 315 approvals,  few have turned into anything resembling a housing start as of yet.

With the most recent public City Council session having taken place this past Monday, the opportunity for others on City Council to offer up a bit of a public rebuttal towards the School District's disappointment was available for those in attendance.

However, during the course of the forty minute Council session this week, the theme of housing never made it into the discussion among the city's councillors, with no mention made of the School District concerns over the issue.

To get a bit of perspective on the large discrepancy between approvals and development, we took a tour around the city over the last few days to examine many of the areas where the City had allowed for proposals to move forward, looking to see if any progress has been made whether it be in the often desire goal of affordable housing in the city.

Of those 315 or so approved units, to this point the total number of completed, or near completed units stands at 21.

The three completed projects make for an increase in the city's housing stock, though to this point it would appear that it's the high end developments that have had the most success in working their way towards a completion date. The now terminated land sale which created all of last week's back and forth between the School District and the Council member, had been offering a much anticipated boost to the city's housing stocks.

However, progress stalled as the process  became bogged down related to a number of zoning issues as the City provided for areas of note that it wished to see developed as part of the housing proposal.

As our timeline below indicates, the last public comment related to the Kanata lands question came in October 19th of 2016, the next mention of the topic not heard until the School District's meeting of March of this year.

Our notes on the Kanata process, as well as the Quickload Lands process which provided for some of the early disputes between the City and School District can be reviewed below: 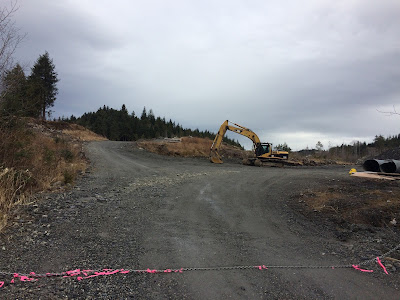 Proposed by the Bryton Group, the same developer of the now abandoned Kanata School project, the first of the major property decisions by Prince Rupert City Council still seems somewhat stalled,with little more than a bit of land clearing to this point taking place for the west side development.

As was the case with their work on the Kanata file, the Bryton group found a number of city directed requirements included, as part of the approval process for the project. 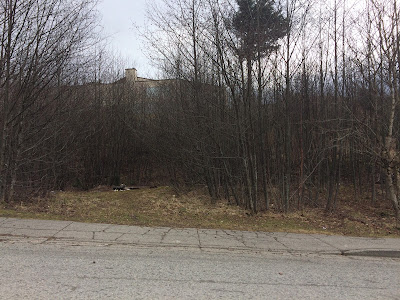 The proposed condominium/office development made for one of the larger battles among City Council members, with a range of opinions on what should, or should not be included in the proposed housing component.

The passing in August of 2016 of Dr. Frank Pyde, one of the proponents of the development may have had some impact on plans to move the project forward. 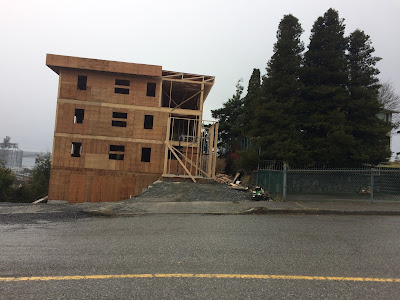 One of the two multi unit proposals that has almost made it to the finish line is this development on First Avenue West, which will add three more residential units to the inventory, though with a harbour view, the price point may be a bit beyond the reach of those seeking affordable accommodation in the city. 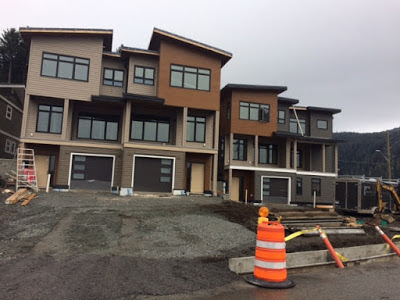 One property development which faced little in the way of Council discussion and no delay from concept to completion, was the Van Arsdol Residences project.

A four plex of high end homes on the west side of the City.

Built by Aurora Homes, the homes are located in much the same area as the city's high end real estate, the four units also come with a top end price tag, ranging from the 549,000 to 619,000 dollar mark. 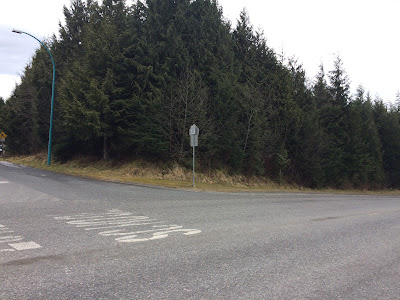 Proposed by Auroral homes,  the same developer as the Van Arsdol project, the proposed multi family development for the lot near along Prince Rupert Boulevard and Drake Crescent has yet to move forward.

The developer did indicate that with the completion of his west side project, he would now be turning his attention to the larger one on the east side of the city, with hopes of starting the Drake Crescent project this spring. 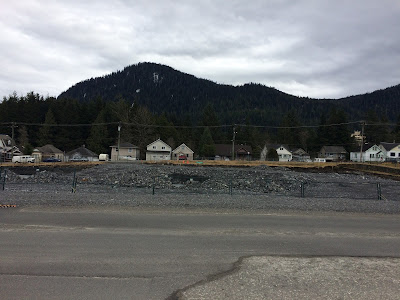 The Metlakatla proposal was another project which received little in the way of discussion from City council, with the development given the green light in as short a period of time as possible.

And while there are no forms put in place yet, some site clearing has taken place to indicate progress continues for the much anticipated addition to the the requirements of Prince Rupert's seniors population. 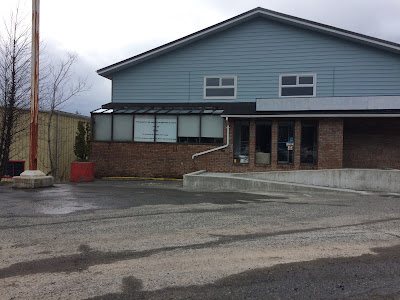 The other project directed towards those in their Senior years is that for the old Neptune Inn site, which after a few items of concern for City Council were sorted out, also move quickly through approval stage.

So far however, the pace towards an opening seems to have slowed a bit, with the building featuring new windows and siding, as well as some interior work 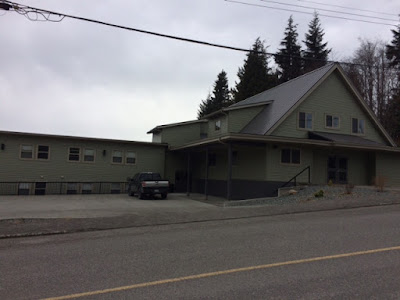 The redevelopment of the old Bethel Baptist Church into executive homes was completed in the Spring of 2016, designed to appeal to what had been expected to be a stream of executives to the community to take part in the anticipated LNG and other development.

It's unclear as to what the vacancy rate may be for the east side complex.

May 7 -- India Avenue Housing Proposal gets Council approval, but not without controversy


When it come to development of a large housing project, the last significant bit of work took place a number of years ago on the Hays Estate sub-division, and even that cul-de-sac neighbourhood still has a few empty lots remaining yet to be delivered.

More background on housing issues in the Northwest can be found on our archive page here.

To return to the most recent blog posting of the day, click here.
Posted by . at 9:23 AM

Email ThisBlogThis!Share to TwitterShare to FacebookShare to Pinterest
Labels: Council's list of housing approvals yet to deliver much in way of housing starts