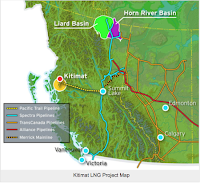 With a faint pulse to the province's LNG ambitions starting to be heard again from the Kitimat region, a number of Northern Mayors have made their way to the Nation's Capital for meetings with Federal officials today and tomorrow.

The scope of the two days of talks is designed to express a number of concerns from the municipal leaders when it comes to the LNG file in Ottawa.

The potential for development of the Kitimat LNG and LNG Canada projects in the Terrace Kitimat region has once again stoked some regional interest in recent weeks.

And from that, the municipal leaders who represent both the gas fields of the Northeast and the terminal proposal area of the Northwest, will be looking to ensure Ottawa is aware of what is at stake for their communities when it comes to economic development and job creation.

With Prince Rupert Mayor Lee Brain not listed as a member of the travelling party, the focus it seems for LNG  in the Northwest is now going to be firmly directed towards the Terrace-Kitimat region, where two proposed developments are still on the books and showing some progress towards potential development.

By comparison, Prince Rupert which only two years ago appeared to be the LNG hot spot in the province, doesn't seem to be much on the radar anymore when it comes to major economic development related to LNG.

The community now left with a string of cancelled projects to show from the last three years of studies, a period of time which featured much in the way of City Council commentary and process participation and lengthy public consultation engagements.

At the moment,  only one proposed development is still officially listed as under consideration in the Prince Rupert area.

Though, that prospect, hosted by the WCC LNG, the Exxon led group exploring options for Tuck Inlet has seen Exxon scale back their interest and work when it comes to the short term prospects for that project.

You can review the background to North Coast LNG story from our LNG archive page here.

For those municipal leaders in Ottawa today and tomorrow, the bulk of their presentation and discussion with Ottawa will involve three key areas that the group wish to stress for the Federal officials:

The development of an LNG industry in B.C. will bring substantial benefits to our communities, the region, the province, and the entire nation.

There is broad support for LNG in B.C. amongst the communities that are most directly affected by the proposed activity.

Fabricated industrial steel components (FISC) tariffs on imports derived from Asia could jeopardize the development of an LNG industry in B.C. by making proposed projects less competitive in the global economy. Consideration should be given to exempting LNG modules from FISC tariffs in order to foster the development of an LNG industry by creating a level playing field for potential LNG investors.

Terrace Mayor Carol Leclerc noted how the LNG projects are not just developments of note for the communities that they are slated for, but in fact provide for benefits for many communities located in other cities in the Northeast and Northwest regions.

“These LNG projects don’t just have support from the communities they are directly located in; they have support from surrounding communities across the region because we will all benefit  ...stated Mayor Carol Leclerc. “The LNG Canada project even has signed agreements with 16 First Nations along the project’s proposed Coastal GasLink pipeline corridor.”


You can explore more about what the group hopes to bring to the table with their federal counterparts from this media release through the District of Kitimat.

To return to the most recent blog posting of the day, click here.
Posted by . at 11:19 AM

Email ThisBlogThis!Share to TwitterShare to FacebookShare to Pinterest
Labels: Northern Mayors in Ottawa on LNG