With the need for action still quite apparent, some good news for the community when it comes to providing for temporary assistance for those without a home in Prince Rupert.

The upcoming March 31st deadline for the operation of Prince Rupert's Extreme Weather shelter has been extended by two months, with additional funding being provided to shelter organizers by the Prince Rupert Aboriginal Homeless Committee.

The announcement from Tuesday was made by the North Coast Transition Society which has taken the lead in providing for shelter for Prince Rupert's most at risk homeless residents, with the organization sharing the news through their Facebook page.

With the additional funding in place, the shelter located in the  old McLean and Rudderham building on the 300 block of Third Avenue West will remain in operation with the same hours in place as those since the shelter opened in December.

Monday to Saturday, the location provides shelter from 8PM to 8AM, while the doors are open Sundays from 4PM  to 8AM.

Organizers are  also looking for some assistance in providing for Sunday suppers through until the end of May, if you can offer a hand contact the shelter. 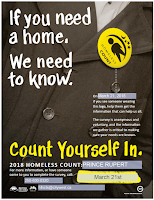 Yesterday was the day for another initiative from the North Coast Transition Society, which held the Prince Rupert Homeless Count, looking to find some solid numbers on just what the homeless situation is like in the community.

Through the day volunteers were taking a tally of those who had approached volunteers to share of their status when it came to housing accommodation in Prince Rupert.

No final numbers have been released as of yet from yesterdays count, with the information gathered on Wednesday to be forwarded to BC Housing to provide a count of those that have housing requirements in the community.

When it comes to more permanent housing for those in need, so far there has been no further indication provided as to the status of the modular home units that were to be delivered to Prince Rupert by the end of this month.

As we noted on the blog last week, the proposal for affordable housing was introduced to the public at the end of November at Prince Rupert City Council.

Since that time neither the province or the City of Prince Rupert have provided for an update on the project and when the units will be up and operating.


To return to the most recent blog posting of the day, click here.
Posted by . at 10:06 AM