It would appear that after some second thought on the topic, the city's Six Council members and Mayor have decided that the optics of the Council Chamber remaining vacant for two months prior to the fall election, may not have provided for the best optics in the goal of civic governance and transparency.

Though when it comes to the latter, City Council has not exactly been proclaiming their council scheduling plans loudly from the top of City Hall.

Sharp eyed readers of the weekly newspaper will have noted that the City of Prince Rupert has purchased an advertisement notice, that modifies the previous City Council schedule adopted in December.

With the notice, Council members have now added three regular public Council sessions to the calendar for September 4, 17 and October 9th, all dates that had been scrapped during council's roll out of the year ahead calendar back in December.

The civic bureaucracy at the time, never explaining how the fall election would somehow have had an impact on the ability to hold public council sessions for close to six weeks.

As we noted back in December, the decision to eliminate the three sessions, including one which should offer up a public comment session through the Committee of the Whole, was a schedule pruning that was done without any discussion in public by the council members.

There's a bit of deja vu to this week's advisory of the change, done as it was by way of slipping a notice into the back pages of the paper.

As it was with the first cancellation noted during the Christmas holidays, this time the notice comes during the spring break, a period of time where perhaps there aren't as many people around to review the latest of notes from City Hall.

The revision to the calendar has still to be made official on the city website, with the old schedule, complete with the empty space for September and October still in place as we put this item to posting. 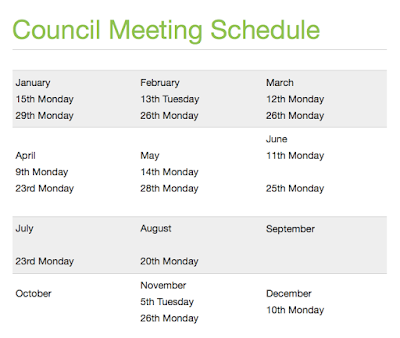 Since they made the original change in December, not one member of Council has raised the schedule issue in a public session, offering no explanation as to why they had then decided to eliminate the three sessions in the first place.

With a Council session scheduled for this coming Monday, perhaps one of the seven members of Council may wish to update the community on the new schedule and offer up an explanation as to why they have decided that the old schedule is no longer part of their delivery of service plan for the year.

You can review some of our past notes on Council Discussions from our archive page here.


To return to the most recent blog posting of the day, click here.
Posted by . at 9:14 AM

Email ThisBlogThis!Share to TwitterShare to FacebookShare to Pinterest
Labels: Council returns sessions to schedule for September and October