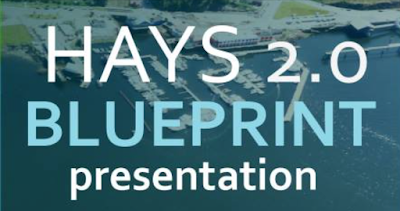 After a four month or so delay, Mayor Lee Brain is ready to bring his updated Hays 2.0 plan to the public once again, with an update presentation planned for the Lester Centre in April.

The city's top elected official has set next month for the long delayed review of some of the original items, as well as to outline a few of the new initiatives that Mr. Brain plans to put in motion as part of his signature document for the city's future.

We last heard of the Hays update plans back in November, with a presentation set for  the Lester Centre cancelled with little explanation,  the promise at the time of a return sometime in the New Year.

The New Year stretched to Spring it seems and now with a short update on the City of Prince Rupert Facebook page, the date has now been set for April 25.

As part of the presentation from Mayor Brain will be topics that include:

During the course of the one month lead period towards the return of  Hays 2.0 to the local discussion, the City is seeking the contribution of the public, looking for input as to what residents might want to know about when it comes to the Mayor's blueprint and other civic issues.

You can help set that portion of the night's agenda by forwarding your comments and questions to the city at:  questions@princerupert.ca

Those wishing to submit questions must do so by Friday, April 20th at 5PM

The Hays 2.0 project was first introduced by the Mayor back in November of 2015

You can review more of the program from the City's website here.

For more background on Hays 2.0 and the other planning projects launched by the City see our archive page here.

Email ThisBlogThis!Share to TwitterShare to FacebookShare to Pinterest
Labels: Hays 2.0 update in April