Council members took in a presentation Monday night from the community group Ecotrust Canada, with Devlin Fernandes and Nathan Randall from the Prince Rupert office providing a bit of a preview of where their plans will take them this summer, as they continue to build up their presence in the community.

It was a return presentation for the EcoTrust group, which had previously appeared in 2016, with Monday's review retracing some of the history of the organization and the nature of some of the fishery related projects that they have taken on since that time. 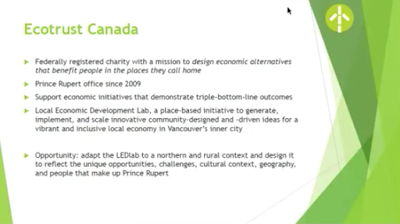 As for what the future may hold, Ms. Fernandes noted how Ecotrust Canada is looking to build on the previous work of the Hays 2.0 plan and ReDesign Rupert initiatives. And outlined how a program that their Vancouver office operates in the Downtown East side may make for a good fit for the Prince Rupert region.

Towards those goals, the organization has created something called the North Coast Innovation Lab, which Ms. Fernandes noted is looking to work on tangible projects that will build a resilient economy in the community, with the lab designed to provide for research, facilitation, design, incubation and project coordination capacity to activate community-led projects.

To deliver on those ambitions, the local office will build community capacity for social innovation through workshops, partnerships, events and other forms of interactive learning.

Mr. Randall provided for the review the Innovation Lab concept and how it will be introduced into the community, with Ecotrust having held consultation sessions in the past with community members to determine some of the initiatives that they may be able to work  together on, with more in the way of consultation to come through the Spring and Summer.

He made note of such areas as growing the local economy for fish and marine products, downtown revitalization, place making and livability, and economic diversification through entrepreneurship.

Ecotrust hopes to have project incubation underway this summer with two graduate student positions to be filled to provide for supports for their work. 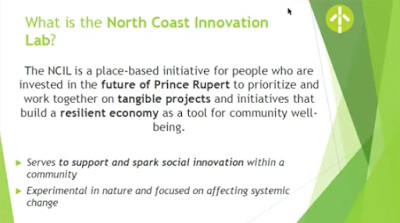 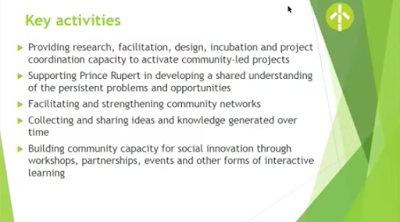 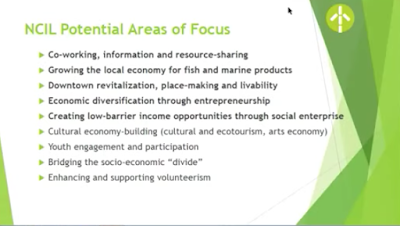 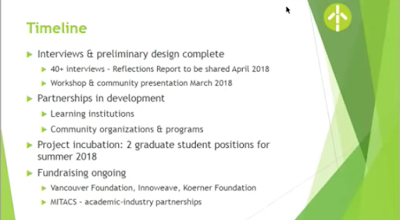 On Monday night they also outlined the nature of the fundraising options that they have access to, as they look to move their projects forward.

As part of their overview they noted that they had recently received funding from the Rural Dividend Fund, something which we provided some background on last week with this item from the blog.

As they look to secure further funding, they also asked for the support from the City of Prince Rupert as they look to access grant funding for 70,000 dollars from the Northern Development Initiative Trust, their request was one that really only requires the approval of council to approach NDIT for the funding, with no financial commitment required by the City.

In the follow up period to the presentation, Council members then asked a range of questions, with Councillor Randhawa inquired about the level of businesses interest in their programs and supports.


Councillor Cunningham had one question for them, inquiring about the prospects of a project that he has long been looking to see developed, that of a Fish Market location for the Cow Bay Marina floats.

The answer he received didn't quite deliver the blue print for development that he might have been hoping, with Mr. Randall and Ms. Fernandes noting that some study would be required with one of the two grad students to be tasked with looking into marine options and what might be required to deliver on that project and what hoops may be in the way before it could move forward.

Mr. Cunningham noted that the only hoops that should be faced would be those put in place by the city by way of permission, which he suggested should damn well be approved by the City.

The Councillor then recounted some of the history to his attempts to move the fish market initiative forward, adding how he would like to see that project in place by this summer.

"The only hoops I see is getting permission from the city which they bloody well better give you cause it enhances tourism, as well as brings people from down the line to buy our product, one complaint I get all the time is, we live in a port city and you can't buy fresh seafood from the fishermen. This is something that I started asking well over a year ago, I know you're only involved in it now, but I would really like to see something up and running by this summer, so that when people do come from Smithers, Terrace or wherever they can actually walk down to the dock and buy crab, shrimp or prawns" -- Councillor Cunningham continuing his quest for a public fish market to set up at Cow Bay Floats during the Summer.

You can review some of the background to that proposal from the councillor below:

As part of his push towards seeing his Fish marked concept come to life, Mr. Cunningham outlined that from his conversations with fishermen they would be quite receptive to the idea of being able to set up on the dock and sell their product

He also made an observation as to the local economy and the fishing industry on the North Coast, making note as to how the current herring fishery was now underway, and with it that a large volume of the fish that has been caught in the region is now being sent to the south for processing, a theme we explored on the blog on Tuesday.

Ecotrust has been heavily involved in some of those issues related to the fishing industry, with the organization having hosting a conference in February which had some strong representation from Prince Rupert.

Ms. Fernandes made a note that the first person that their grad students will contact for research will be Councillor Cunningham  to learn more on the fish market proposal, she then outlined how ecotrust Canada does have concerns as to the nature of the adjacency of the fishery and the best way to address local jobs related to fish industry.

To bring the presentation to a close, Mayor Brain noted that he had been working closely with them, and then offered his praise for their work to this point and thanked them both for their efforts and looked forward to working collaboratively with them.

Council then voted to approve their support for the bid for a grand from NDIT.

You can review the full presentation from Ecotrust from the City's Video Archive, starting at the thirty six minute mark.

More notes on the range of Discussion topics at City Council and city related issues can be reviewed from our Council Discussion Archive.

Further notes on the work of Ecotrust, ReDesign Rupert and such can be reviewed on our archive page here.

More background on the North Coast Fishery is available from our archive on Fishery items.

Email ThisBlogThis!Share to TwitterShare to FacebookShare to Pinterest
Labels: Ecotrust Canda plans for 2018