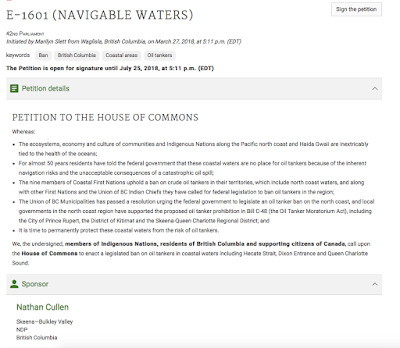 With a petition and court challenge now in motion to try and bring an end to the Federal government's plans for a Tanker ban on the North Coast, those in favour of the Federal plan are marshalling their forces to make sure their voices are heard as well.

In a Facebook post from Wednesday, The Prince Rupert Environmental Society called for North Coast residents to join in on a petition, initiated by Marilyn Slett the Chief Councillor of the Heiltsuk Nation and an initiative that has been sponsored by Skeena-Bulkley Valley MP Nathan Cullen. 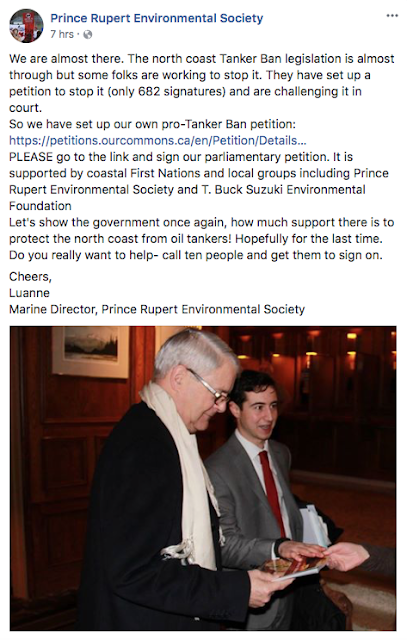 The background to the call for signatures notes that it is supported by Coastal First Nations, and local groups including the Prince Rupert Environmental Society and T. Buck Suzuki Environmental Foundation.

And while not mentioning any groups by name, the petition would seem to be an answer to recent moves from those in the Northwest that would like to overturn the Liberal plans for a tanker ban on the North Coast.

A petition drive to seek support just such a call was launched on February 5th, with a closing date of June 5th.

Earlier this year, we outlined the plan by supporters of the Eagle Spirit Pipeline and Oil Terminal, known as the Chiefs Council, who launched a Go fund Me Initiative, to provide for funding towards a court challenge

As we noted last week, the Lax Kw'alaams Band Council also launched a court challenge against the Federal moves, filing their documents at the Prince Rupert Court House last Thursday.

The petition to support the tanker ban was opened for signatures on March 27th and will close for participation on July 25th.

As of Thursday morning, close to 600 signatures had been collected for the support the tanker ban petition.

You can learn more about the petition drive and sign on if you wish from this link.

For more items of note related to the Federal political scene see our House of Commons archive page here, a wider overview of Federal issues is also available on our D'Arcy McGee blog.