Blair Mirau claims spot in BC Business 30 under 30 listings


Another young Prince Rupert resident has been recognized by the financial magazine BC Business, with Blair Mirau, the CEO of the Gitmaxmak'ay Nisga'a Society cracking the list with two years to spare.

The BC Business review charts his quick rise to the CEO's office with the Society, the local non-profit organization which provides educational, cultural and recreational services for members of the Nisga'a First Nation on the North Coast.

Mr. Mirau who joined the organization as a grant writer, has progressed to the CEO's office following the launch of a number of economic initiatives including the purchase of the Garden Centre at Seal Cove, the start of a lawn care service from that location,  running a charter bus service and public event space in the Nisga'a Hall as well as work on the commercial salmon smokehouse program.

Those were all areas which BC Business took note of as part of their profile of the executive, including the growth of the economic development corporation to a staff of 20, from its original four and if the CEO has his way, that side of the Society will be adding another ten jobs and reach 1 million dollars in revenue in the near future. 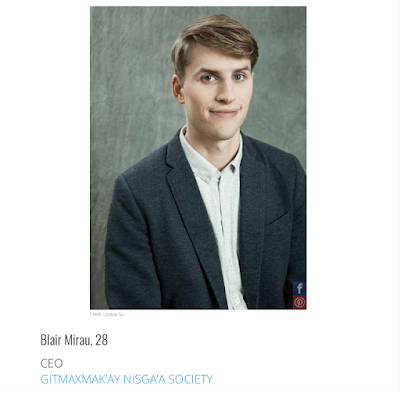 Such was the focus on business and entrepreneurship, that BC Business did not even dwell much on his current status as a first term member of the Prince Rupert City Council.

His work on Council has found him to be a strong advocate for business interests in the city, which included the formation of a Small Business Committee, a project which he has steered through the City Council approval process, something which came with a few delays before the group took to their work.

The first report from the Committee is due sometime this spring, with Mr. Mirau recently noting that it will explore ways that the City can help small business through reduction of red tape and issues related to taxation in the community.

You can review the full BC Business profile for Mr. Mirau here.

Mr. Mirau joins Amy Dopson as part of the growing list of Prince Rupert honourees, Ms. Dopson  was a 30 under 30 winner in 2014, recognized for her work as a founding partner of Pac 10 Tutoring.

Her feature with 30 under 30 not only raised her profile in the province, but also gave the Pac 10 Tutoring program added exposure far beyond the city boundaries.

The Prince Rupert CEO and the other 30 under 30 Business leaders for 2018 will be celebrated for their achievements as part of an evening at the Vancouver Club, set for April 12th from 5:30 to 8 PM.

The full biography review for the twenty nine other members of this years winners listings can be found here.

For more items of interest related to the Northwest Business scene see our archive page here.


To return to the most recent blog posting of the day, click here.
Posted by . at 8:38 AM

Email ThisBlogThis!Share to TwitterShare to FacebookShare to Pinterest
Labels: BC Business 30 under 30 winners