The participants in the twin industries of the commercial and sport fishing on the North Coast, along with First Nations communities across the region will all be awaiting further studies and reports from the Department of Fisheries in the weeks to come, with the prospects for the summer salmon season making for the focus of all those concerned.

But in early notes from  DFO  are any indication, the state of the Northern British Columbia fish stocks for 2018 may once again require some strong measures if trends continue.

Early studies of fish stocks from DFO suggest that the returns don't look good, providing for a concern which could deliver the potential for closures for all three elements of the North Coast Fishery.

How the review moves forward over the next few months, will be making for some very interested participants in ongoing consultation sessions with the Federal agency that is tasked with watching over the fish stocks of the west coast.

Reports from February provided for the first indications that this may once again be a troubling year on the North Coast, with the outlook for Sockeye and Chinook on the Skeena and Nass of particular concern:

Chinook
Northern  BC -- average to variable status; some declines over prior status 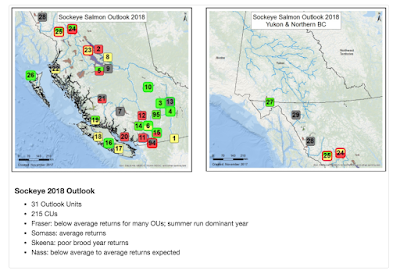 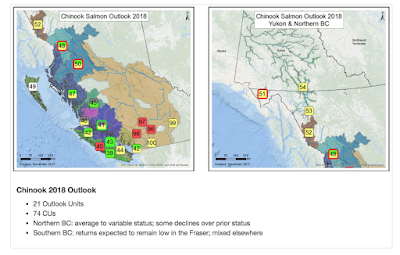 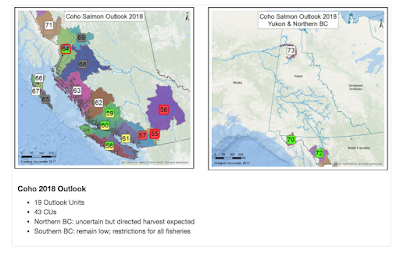 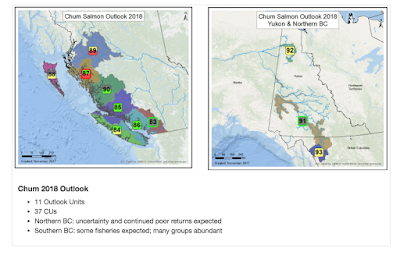 More background on those snap shots can be reviewed here.

The nine maps provide the early data for each region and should they continue to deliver forecasts for low stocks or less than 25 percent of the target for some fish stocks, the North Coast could see restrictions put in place, or outright suspension of fishing in those areas of greatest concern.

The criteria that DFO uses to make those determinations can be reviewed from the Preliminary 2018 Salmon outlook here.

Any significant closure to either the commercial or sport fishery would have a significant economic impact on the North Coast, whether it be by way of another season of reduced, or eliminated job opportunities at the region's fish processing facilities, or through the hit on the amount of tourism generated by the sport fishery in the region.

It should be noted that No decisions have been made as of yet, as DFO continues to review their data, further consultations will continue on with stakeholders in both the commercial and sport fishery.

As well, owing to the importance of the fish stocks for First Nations communities for food and  ceremonial use, those requirements make for a priority following the need for conservation policy.

All of which will be part of any ongoing discussions that determine what course of action DFO will take in concert with First Nations across the Northwest and Haida Gwaii.

Those discussions will have also considerable input into how the Department puts together its Salmon Integrated Fisheries Management Plan, which is the blue print for how the fishery is handled from year year, the 2018 plan should be in place for June 1st of this year.

A look at the current Northern Pacific Salmon Integrated Fisheries Management Summary can be reviewed here, that plan will expire on May 31st of this year.

Updates on the North Coast Recreation and Commercial Fisheries are available from this link to the DFO Pacific website.

You can also keep an eye on the Department of Fisheries News listings, for any updates to the situation as more data is received.

More notes on the North Coast Fishery, as well as some of the news from the north in the Alaskan fishery can be reviewed on our archive page here.