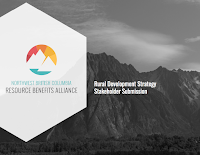 The alliance of Northwest government's that are seeking more awareness of local issues when it comes to developing the rural economy have delivered their submission to the NDP government's rural development strategy engagement process.

With the Northwest BC group providing the John Horgan cabinet with a blueprint of sorts as to what the NWRBA is looking for from the province.

The document was submitted to the British Columbia government's Rural Development Strategy public engagement process on Wednesday,  and with its delivery to the province, Northwest British Columbia Regional Benefits Alliance Chair Bill Miller made note of the group's support for the development of a rural strategy.

But also added a note of caution that it must address the concerns of the rural regions of the province.

“The RBA fully supports development of a Rural Development Strategy for BC that will bridge the urban-rural divide and create sustainable communities across all of rural BC,” ...“However, it’s vital to develop a strategy that takes the needs and circumstances of different rural regions into account.”

Included in their report for the province is a six point checklist that NWRBA would like to see addressed by the province. The six items of note for Mr. Horgan and his cabinet colleagues includes:

Develop a framework for rural development that is flexible enough to meet the needs of different regions.

Ensure the work done to create the Rural Development Strategy includes adequate research on existing conditions in different regions of the province.

Make sure the strategies developed take into account the level of current and potential economic activity within different regions, with a focus on translating that activity into sustainable communities.

Recognize that the benefits of economic development in rural areas must improve the long-term sustainability of rural communities.

Commit to working closely with groups, such as the RBA, in each region to formulate a governance model for a particular region.

Use the proposal put forward by the RBA as a pilot project to develop and test strategies to support sustainable economic development and sustainable communities in rural BC.

Of note for residents of Prince Rupert is a segment of the report that focuses on the preparations that the city embarked on in the early days of potential LNG development.


Not noted in the presentation however, is the way that the City of Prince Rupert approached that process of three years ago, a period of time where much of the discussion on the planning for major projects and associated other industrial development was done outside of the public council session.

Had the city council addressed some of that burden of planning through the public forum of a council session, perhaps residents might have then been provided more details related to the volume of public money that the city was planning to allocate towards that project.

As well, had the public forum of a Council session been used, it would have allowed for public discussion by the Council members as to whether they were all in agreement that those volumes of scarce city resources should have been spent.

Since the discussions related to that planning were held largely out of public view, we'll never really know whether a more scaled back roll out of all those elements might have been discussed by Council members.

Or if some thought had been given towards having the City wait a bit until the ever changing development picture in the region had become a little more clear and stable.

Other community snapshots that are included in the report for the province come from Terrace, Telkwa, Hazelton and Fort St. James

As for what the Northwest collective is looking for when it comes to sustainable economic growth, the submission explores themes related to the desire for good jobs, training and apprenticeships for residents, as well as First Nations participation, respect for the natural environment and an economic return that creates sustainable and vibrant communities.


As we made note of at Budget time in February, there had been a fairly lengthy period of silence from the Northwest Alliance since they hailed the arrival of the new NDP government.

The declarations from the NWRBA at the time were to the effect that the newly arrived government was somewhat of a breath of fresh air when it came to their aspirations of a larger share for local government when it comes to resource development.

The main takeaway from September was the sense of optimism which RBA Co-Chair and Kitimat Mayor Phil Germuth had expressed for the process ahead:

“The John Horgan government really understands that we experience great inequity in the northwest,”

“The Northwest is the backbone of BC, and in order to ensure our communities continue to support economic development activities that contribute to the province, we need a share of the revenues to stay in the Northwest.

The Premier sees that investing in the Northwest is not just about making up for lost time, but spurring growth in the region. It is an investment from which the entire province can expect a large economic return " -- RBA Co-Chair Phil Germuth in September 2017 following meetings with Premier John Horgan

With the release of their report yesterday, RBA Co-Chair Barry Pages, who is also the Chair of the North Coast Regional District, seems to have scaled back some of that early euphoria, with what seems like more of a we'll see where this leads approach.

In his statement from Wednesday's release, Mr. Pages notes that the group continues to applaud the province's work on rural issues, but adds that the current funding is at an unreasonable level to effect much in the way of change.

“We applaud the province for its prompt attention to rural development, as it has been neglected for so many years,”  .. “However, the existing $25 million available through the Rural Dividend program is totally inadequate to deal with the problems faced by rural communities, and we look forward to continuing to work with the province to develop a new strategy that works for each region in rural BC.”

The information release from the NWRBA also notes that to date, no benefits sharing agreement has been reached between the organization and the provincial government, with the two sides still continuing to meet towards some form of solutions for the Northwest.

You can review the full document from the Resource Benefits Alliance here.

Some of our past notes on their work can be examined below:

Items of interest on issues for the City of Prince Rupert can be reviewed through our Council Discussion page.

Email ThisBlogThis!Share to TwitterShare to FacebookShare to Pinterest
Labels: NWRBA submission to BC gov't