The first day for the 2018 Tier 4 Bantam Provincials wrapped up Sunday night with a thrilling finish, and for the fans of the Prince Rupert Seawolves, the nightcap to the tournament opener provided for some strong end to end play and a quick flurry of goals for the PRMHA team that gave the Seawolves their first victory.

Taking on a Kitimat Wintherhawk squad that had player earlier in the day, the wrap up to night number one was a tight contest, with the two teams treading off opening period goals to take them to the dressing room locked in a 1-1 tie.

That score would hold through forty minutes of play, as the two teams traded off scoring opportunities, a number of them on power plays but found both goaltenders equal to the task with no results to show heading into the third. 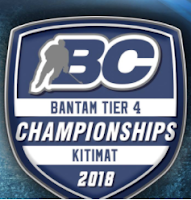 The Winterhawks were the first to break the tightly played defensive zone action picking up a go ahead marker roughly midway through the third, a score that held up for the home side through until the last few minutes of play.

It was then that the Seawolves, who had taken the play to the Kitimat squad found the mark with a pair of goals within minutes of each other, the latter with time nearly expired, the strong push back from the Rupert Bantams securing the 3-2 victory and setting the stage for Day number two for both teams.

Earlier in the day, the Winterhawks were edged by the Langley Eagles who claimed a 5-4 victory over Kitimat in the 1PM Game, the 4 PM contest found 100 Mile House playing some dominating hockey on the way to a 7-4 victory over Windermere Valley.

Day Number two finds the Seawolves with twice a day schedule with games at Noon and 7:30Pm

The Prince Rupert squad plays100 Mile House in the mid-day game, while the Langley Eagles make for the competition as Day number two wraps up with a 7:30 start time.

As well, all of the tournament action is available through CityWest Community television which is planning to stream games online and through their Chanel 10/HD310 community channels.

Email ThisBlogThis!Share to TwitterShare to FacebookShare to Pinterest
Labels: BC Bantam Championships at Kitimat