After a weekend of social media outrage over the extreme pruning of a stand of Cherry Trees on the property of the Department of Fisheries downtown, Prince Rupert Mayor Lee Brain issued a lengthy statement on the topic on Monday, impressing on the public how the blame for the situation rests with Federal officials, seemingly far from the local offices that are found in the city.

Taking to his Facebook page (a location which channelled much in the way of anger over the weekend following his initial advisory) the Mayor worked a bit of damage control on the still heated issue, while keeping the focus on the Federal officials who went ahead with the unwelcome landscaping work.

While he was offering up the City's review of events, he also noted, and correctly so, that the public should not turn its frustration and anger on those who work in the Federal building and who are residents of the community, noting that many of them are also upset by the work that took place.

The Mayor's Facebook presentation makes for a rather  protracted overview of the situation, with a range of pathways to follow along the way, however, two items stand out from all of the Mayor's message making.

The first being some information not previously disclosed, with the Mayor noting that the City of Prince Rupert, had indeed known about the Federal plan much earlier in the week prior to the Friday cuts.

Something that wasn't made quite so clear on Friday, with the delivery of the original notice of the incident as relayed through the Mayor's Facebook page.

From Monday's update and review of the situation, segment Four of the Mayor's commentary provides for the timeline of sorts between Tuesday and Friday for us to review:

4. Permitting: PSPC’s contractors came in to the City on Tuesday to request a 'sidewalk closure permit' from the City so they could park their vehicles on that street for longer than two hours and encumber the sidewalk.

The City inquired what for, and they mentioned to cut down the trees. Our engineering department mentioned they could not cut down those trees, but the contractors claimed they were on federal property.

Our surveying crew then came out to check whether these trees were in fact on federal property, and discovered that they were. The federal government does not need a permit from the City to cut down trees on their property.

Our engineering department did what they could midstream to try to stop the situation, but legally could not do anything about it. Never in a million years would Council or anyone at the City chop these beautiful trees down.

And while that passage explains how, despite the city's objections, the trees still managed to get cut down. Friday's incident also tends to highlight the second takeaway of yesterday's commentary from the Mayor.

That being an indication as to how the City seems unable to deliver community concerns to outside officials in a fashion that nips such situations in the bud, something which has been a recurring theme in the community for  a number of years, for a number of past councils and Mayors.

The Cherry Blossom Tree issue, is somewhat similar to the episode with CN Rail and the fencing off of the waterfront last year, another incident which found the City somewhat out of the loop and unable to effect change.

And that is not the first time that the community has found actions taken without any form of consultation.

Back in August of 2011 local residents who once enjoyed the peaceful nature of Ridley Island and its waterfront area, were suddenly denied those opportunities by the Port of Prince Rupert, which put in security measures to ensure that there was no more public access to the Ridley Island site.

And while the actions at that time time did make for some sense on a corporate level and the land is, and remains under the control of the Port of Prince Rupert, somehow missed in that move was the sense of loss that the community felt, without benefit of discussion, or an offer of some other option to provide for a  replacement of similar nature.

Over the last decade, bit by bit, Prince Rupert residents feel that they are being squeezed out of their own hometown, with the incident of Friday another sign that no one is inclined to consult with them before irreversible actions are taken.

What must be disappointing for the Mayor is how the latest incident was launched despite his frequent trips to the nation's capital, where Mr. Brain has sought to build relationships with federal officials and to raise and address local issues.

With each journey that the Mayor and City Manager have made back east, Prince Rupert residents have been advised through the same Facebook page, of the importance of those trips and how they provide benefits to the community.

Yet it seems that in the case of the Cherry trees,  through the three days of last week, from the initial notice of the planned work,  to the time that the chainsaws came out, neither the Mayor, City Manager, nor anyone else at the City could apparently reach anyone on the phone to put a stop to what has now become another symbol of community outrage.

With the trees now reduced to unsightly stumps in the sidewalk, the Mayor is calling for "respectful" commentary, funnelling those contributions though his social media page, noting how Public Services and Procurement Canada is willing to make amends for the incident.

Towards that engagement, the Mayor is now asking for submissions from the public as to how the Federal Services Department can honour the history of the trees for the community. 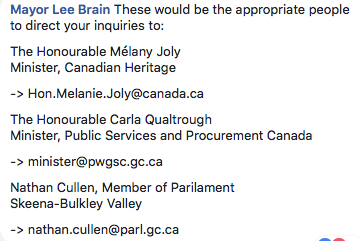 Still to be delivered to the community, is any form of communication from Public Services and Procurement Canada that might help to explain their decision and to offer a companion piece to the Mayor's account of the events.

That would provide some guidance for the public as to whether the work was related to safety concerns, or other other considerations that led them to the decision to bring out the chain saws on a Friday morning.

Perhaps at some point Federal officials may provide for their own media release on the topic and offer up more background on the work that took place.

Until that point, all we have is the City's account of events and towards that theme, you can review the Mayor's full manifesto from Monday here.

Friday's Cherry Tree cull has generated a few contributions for the discussion, which can be found below:


More items of interest related to Civic issues in Prince Rupert can be found on our Council Discussion page.