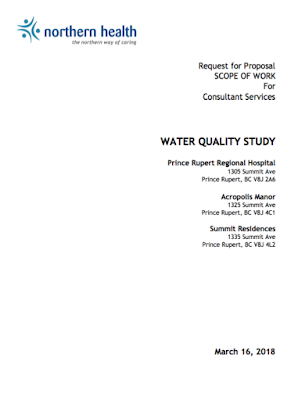 Northern Health is set to launch a study of the water quality delivered to its various facilities around the Prince Rupert region, with the Health Authority issuing a request for Proposal for consulting services for the project late last week.

As part of the Project overview, Northern Health outlined that the request will consist of investigative work on the water supply for Prince Rupert Regional Hospital, Acropolis Manor and the Summit residences.

Among the required tasks for the successful applicant will be to study the intake water from the City of Prince Rupert and upstream areas for potential contamination, as well as to sample and test the various locations through the three sites hosted by Northern Health in the community.

To provide would be applicants with some background on the water issues of note for Northern Health, they provides a short synopsis of the City of Prince Rupert's current work on water infrastructure and procedures.

To ensure the water supplied by the City is safe for drinking, the municipality uses chlorination and maintains appropriate residual chlorine levels as the water passes through the distribution system. The residual levels are monitored electronically on a regular basis to ensure the system has not be compromised.

The City has been working on upgrades to the Woodworth Dam, the supply main, and associated roadway. It is their intent to replace one of the two submarine water mains which pass below the Fern Passage once funding has been secured.

However, as Northern Health notes in their request for submissions, while the City continues on with their water projects, there have been some issues of concern for the Health Authority that they wish to address through their study.

Despite these efforts, the water supplied to PRRH, Acropolis Manor, and Summit Residences raises many questions regarding its quality thus prompting the need for a water quality study. The existing water system at PRRH is not recirculated, thus, the hospital experiences stagnant water in its lines in areas with less use.

It has also been found that in some areas of the hospital, the chlorine count drops close to 0mg/L which could be a result of one or a combination of: the age of the water in the system, microbial re-growth, contamination that consumes the chlorine, and/or a reaction with corrosion by-products.

Acropolis Manor and Summit Residences were built in 2009 and have a recirculating water system. Northern Health Public Health Protection (NH-PHP) has identified potential risks associated with the water quality isolated within the Prince Rupert Regional Hospital (PRRH) and recommends further sampling, testing and if warranted, mitigation.

The water quality is described as discoloured, muddy or slimy. Further exploratory sampling will determine if the sediment is a result of biological (bio-film) or chemical (corrosion of interior piping) processes. The effect is increased when taps at PRRH are not used for long periods of time (typically a period greater than 24h). NH-PHP completed a preliminary inspection comprised of initial observations and tests.

The observations and tests by NH-PHP are cursory and not exhaustive. These observations should be viewed as a starting point to help guide issue identification.

The full review of the  49 page Northern Health Request for proposals, and conditions for which the study should take place, can be reviewed from Item Number 128 of the the BC Bid site

The goal for Northern Health is to have the study into their water supply start within two weeks of the contract award.

Proposals from interested suppliers for the study are to be delivered to Northern Health by April 5th at 2PM.

It's not the first time that water related issues have become an item of note for a local organization, two years ago School District 52 and Northern Health outlined the measures taken to address concerns related to lead in the water at some of the School facilities in the city.

At that same time, North Coast MLA Jennifer Rice who also spoke out on the SD52 water concerns, also raised some questions about the water at local social housing buildings in the community

To return to the most recent blog posting of the day, click here.
Posted by . at 10:46 AM