While North Coast MLA Jennifer Rice has just nicely settled into her position as the Parliamentary Secretary for Emergency Planning and the duties that come with it, there might be a need to take a little bit of time to address a couple of issues that seem to be percolating back at the newly relocated home office on Second Avenue West.

An interesting aside in this week's City of Prince Rupert Budget presentation should serve as a warning shot that there's a bit of a disconnect between the MLA and the city council of her hometown.

As part of Monday night's budget notes, Corinne Bomben, the Chief Financial Officer for the City took a political turn on the night and fired a salvo in the direction of Victoria.

"The problem has been that the province has placed a limit on the property tax rate that the city can use to collect taxes, Council has tried  for years to make the province aware of the unintended consequence of this legislation. There was hopes that the new government would bring some relief, however it has only been a change of actors and not the story"

That would be the ouch moment for the NDP government, comparing their work to much of the same old, same old, that the city has regularly complained about in the past when it came to the previous Liberal government.

Even worse, particularly for the staff at the MLA's Prince Rupert constituency office, the City is calling on some help from taxpayers of the city, urging residents to send in some letters of concern to their MLA, urging action on the issue

Another issue that seems to be a lightning rod between the City and the province is the state of affairs between Prince Rupert and Port Edward when it comes to the Ridley Island Tax Sharing Agreement.

The City would like to renegotiate that arrangement, but so far there has not been much enthusiasm from the District of Port Edward towards that idea, and  considering that the District will receive an additional 300,000 dollars this year, making for a total of 900,000 dollars coming their way from Prince Rupert, that probably shouldn't be a surprise.

One imagines, that the City of Prince Rupert might like to have the MLA and the provincial government weigh in with some thoughts and assistance towards their goal of a more balanced distribution of money on that file.

Then there is the Northwest British Columbia Resource Benefits Alliance and that regional desire for action on their much discussed goal of a better sharing of the resource revenue pie in the region.

Last September during the annual trek to the UBCM meetings, the members of the organization were quite enthusiastic about their talks with Premier Horgan and other government officials, with much talk at the time of a belief that the new NDP government had a better understanding of the issues.

“This agreement will also ensure local First Nations benefit as well, by allowing us to strengthen relationships with the surrounding communities ... This will be a win-win for everyone.” -- City of Prince Rupert Mayor Lee Brain

“It’s refreshing to be working with a government that is committed to finding a way to make this agreement happen ... John Horgan also committed to meet again in December to check in on the progress that has been made.”  -- RBA Co Chair and North Coast Regional District Chair Barry Pages

Close to six months later, and with a budget that offered up no indication of any kind of financial payout to come the way of the Northwest, one wonders if the municipal officials are feeling quite as smitten with the new Premier.

For an organization that was quick to the media releases during last years election campaign and in the courting phase of the relationship with the new NDP government, the Northwest Resource Benefits gang have been quite subdued of late when it comes to speaking out on the status of their initiative.

When it comes to updates on how things are going between the NWBCRBA and the government, there have been no new declarations of Peace in Our time to be found since September, from either their website or Facebook page.

Over the course the last few weeks since the MLA's returned to Victoria, the North Coast MLA has had effusive praise for the NDP government's Speech from the Throne, Budget presentation and pretty well any announcement that the ministers on the NDP Government side of the house have made 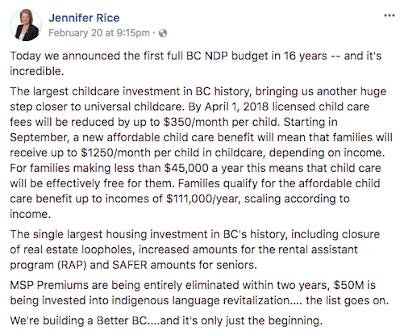 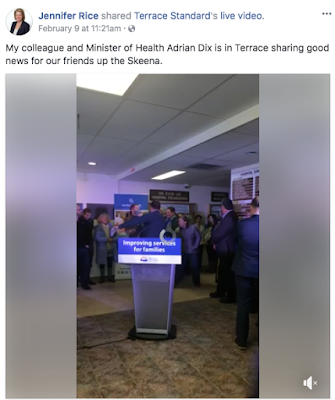 As can be seen, Ms. Rice has done a spectacular job of representing the Horgan Government to the North Coast, a task she takes on with relish and often by pointing out how the NDP has taken a different path than the Liberals previous.

However judging by the tone of the City's Budget presentation of Monday night, Prince Rupert might like to see her represent her home community and some of its financial concerns with a lot more enthusiasm when it comes to discussions with her boss and Cabinet colleagues.

Many of the city's issues of note from the past are reviewed through our Council Discussion page here.

To return to the most recent blog posting of the day, click here
Posted by . at 4:08 PM