For Premier Horgan, when it comes to changing the electoral system the answer from the voters was a resounding No! 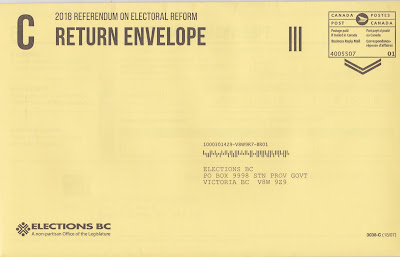 Elections British Columbia has released the findings of this fall's electoral process referendum, with British Columbians delivering a very strong NO vote to the concept of changing from the current First Past the Post System.

The vote which began at the start of November and was extended one week into December wrapped up on December 4th and found 61.3 per cent of those who voted preferring to stay with the First Past the Post System, with 38.7 percent indicating a willingness to take one of the other options for proportional representation out for a test drive.


With the vote, the book would now seem to be closed on change for the province's electoral system, this was third time that British Columbians have been asked if they wanted a new electoral system and each time the answer from the voters has been thanks, but no thanks.

For the history books however, the results of the second part of the two part referendum process, there were 831,760 votes cast for the alternative options, with a second round of counting required to determine which of the alternatives would have been supported, with the Mixed member proportional process preferred.

The voting totals from the electoral reform referendum represented returns from only 42.6 per cent of the province's eligible voters.

The listing of the results from Elections BC can be reviewed here.

The Premier released a statement shortly after the announcement, noting how the people had spoken and while disappointed the decision of those how voted should be respected. 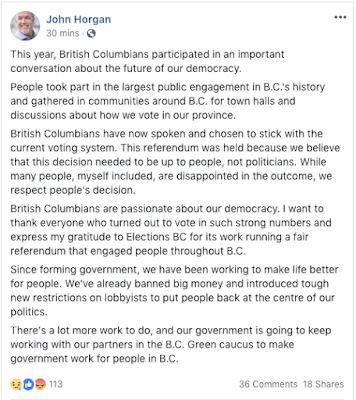 The results will be particularly disappointing for North Coast MLA Jennifer Rice, who spent much of the five weeks of the referendum campaign advocating for the move to proportionals representation.


So far however, Ms. Rice has not offered up any statement or comments related to the outcome of the results that were announced today.

You can look back at the referendum campaign from our archive page here.

For more notes on provincial politics follow our Legislature archive,

Check our political portal D'Arcy McGee later this evening for some of the reaction from across British Columbia to today's news out of Victoria.
Posted by . at 3:37 PM

Email ThisBlogThis!Share to TwitterShare to FacebookShare to Pinterest
Labels: Electoral reform results bring No vote to change of the electoral system