As is tradition at the end of the year, the Governor General has made appointments to the Order of Canada, with 103 names announced today as receiving one of Canada's highest honours.

And Among those appointed to the Order by Governor General Julie Payette is a familiar name for North Coast residents, with Prince Rupert's Gloria Macarenko appointed as a Member of the Order of Canada.

Ms. Macarenko, was one of ten British Columbias to receive the honour today, her citation noting her contributions to the broadcasting industry and for her support of charitable causes. 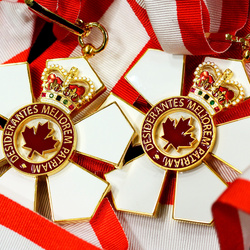 The popular CBC personality who currently hosts the On the Coast radio program out of CBC Vancouver has stayed close to her Prince Rupert roots, returning often to aid local causes, among them her ongoing work with the Prince Rupert Foundation.

She regularly returns to the community for local reunion events and other community activities.

Ms. Macarenko will receive her Order of Canada at a ceremony to be held sometime in 2019.

Learn more about the Order of Canada here.

For more notes on Community related item in Prince Rupert see our archive page here.
Posted by . at 10:47 AM