The recent spate of nasty weather has claimed a bit of the North Coast shoreline, with a section of the Rushbrook Trail now off limits while the Kaien Trails group puts together its work plan to repair the section in question.

The section of the Trail leading from Bobs on the Rocks east to the first bridge was closed to the public on December 11th after a section of trees on the shoreline had become overturned, leading to the collapse of a portion of the trail.

Trail users are being asked to stay away from that section, the rest of the trail which is accessible from the Seal Cove area is still open, however those using it are asked to turn around at the Bridge One location and retrace their steps rather than carry on through to Bobs on the Rocks.

A Facebook post, along with some photos of the area in question from Kaien outlined the situation earlier this week, however no timeline is indicated towards when the work to repair the trail will get underway. 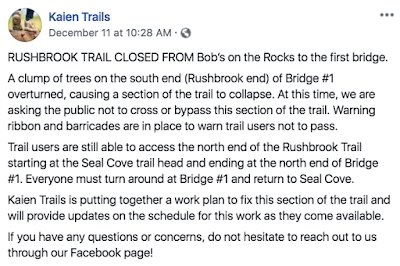