A collection of First Nations leaders met in Prince Rupert on Tuesday evening bringing their call to work together for LNG development to the Crest Hotel.

The group who have banded together to form the First Nations LNG Alliance calling for the responsible development of LNG in the region, on Tuesday they highlighted some of the benefits that development will bring to their communities, while acknowledging that there is some division in their communities when it comes to issues of resource development on their territories.

Chief Councillor Crystal Smith of the Haisla Nation provided for the theme of the night, noting of the opportunity that is available to create opportunity across Northern British Columbia,

"First Nations in BC have an opportunity in front of us that is historic, and opportunity that comes from the development of the LNG industry. We have the opportunity to re-instil our economy of our past and bring it into a modern context. It is imperative that we become united, united as Indigenous communities for the benefit of our people"

Chief Smith who is also a director of the First Nations LNG Alliance also  provided a review of the path towards the opportunities to "share the wealth" of the First Nations territories, noting how former hereditary chief Jassee (Tommy Robinson) had provided direction to the elected leadership in the 1990's  with the council through a referendum putting aside land on the West side of Douglas channel to be used as an industrial site, specifically for use for an LNG export facility.

With the LNG Canada project now in its development planning, Chief Smith also outlined some of the spin off effects already seen in her community, with more than 130 Haisla members working on dredging  activities related to the development along with support for students in the Haisla territory, with the employment of up to 21 people to assist in developing culture and language initiatives.

The Haisla Chief Councillor noted that those programs are in place not through government funding but by way of economic development.

Karen Ogen-Toews, the CEO of the alliance, provided some background on the current situation in the Gitxaala Nation, with recent headlines indicating the nature of the divisions that are found in those communities when it comes to pipeline development through the territory.

Recounting some of the divisions between elected and hereditary leaders among the Wwt'suwet'en Nation she highlighted the need to come together in order for the region to prosper.

"These two entities serve band members and clan members. The point is, they are the same people. As leadership, it is a tough balancing act. We need to find ways and means to sustain our communities economically. We need to balance the environment and economy, for the people"

Calling back to her time as a former chief, Ogen-Toews noted how she had attempted to bring Wet'suwet'en elected chiefs and hereditary chiefs together to work for the benefit of their people, observing as to how the relationship in the Wet'suwet'en nation is at the moment broken and needs to be fixed.

"Our people need both the hereditary chiefs and elected chiefs to work together for the people. Witnessing the Gitxaala and their words of wisdom, compassion and humility has given me hope for our Wet'suwet'en nation. I pray and hope that we can come together as one people and work together so our people can prosper" 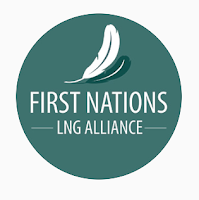 Also sharing some thoughts on the evening was the LNG Alliance chair, Chief Dan George of the Ts'il  Kaz Koh First Nation from Burns Lake, he observed as to how there are hereditary chiefs who support the Coastal GasLink Pipeline proposal and value the benefits that it will bring to First Nations communities.

Members of the Alliance also called attention to concerns from some First Nations leaders about the work of some environmentalists and how their view of development sometimes does not mesh with what communities want.

"I don't mind environmentalists coming into our territory, but when they try to stop everything, we have to think no. I am really thankful that we are going to have employment in our Nation, it's exciting" -- Chief Councillor Vivian Tom of the Wet'suwet'en Nation As the First Nations LNG Alliance was making its presentation in Prince Rupert, some four hundred kilometres to the east an indication as to some of the division in their communities was on display.

On Tuesday, members of a Wet'suwet'en clan had set up a check point on the Morice Lake Forest Service Road south of Houston, the check point was related to a decision from the BC Court to put in place an injunction against the Unist'ot'en camp blockade in order to allow Coast GasLink access to the region.

The check stop is designed to control who gains access to the Morice River Road and organizers say it will remain in effect until further notice.

Unist'ot'en camp in BC still in place, while different clan sets up new blockade outside of injunction zone
Gitdumden checkpoint blocks access to Unist'ot'en camp
Hereditary Chiefs Speak out at pipeline roadblock

Protests also took place at a number of MLA's offices with protesters also directing their concerns to a number of NDP cabinet members. There was also a street protest in Vancouver in support of those in the Unist'ot'en camp following the announcement of the injunction.

The Final investment decision for the LNG Canada project was made in October.

You can find more background on the project from our archive page.