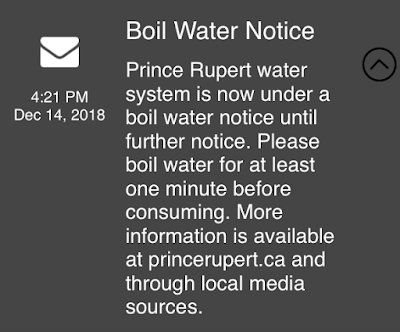 Yesterday's advisory from the City of Prince Rupert calling on residents to Boil their water has started to gain a fair bit of attention across the province, with a number of news organizations locally and around BC making note of the city's water woes.

Some of the notes of interest can be found below, we'll add to the list as more accounts from across the province come in.


Rest of the Province

The key elements of the City's warning included:

Residents are directed to boil water continuously for one minute prior to drinking. Seniors, children, and people with compromised immune systems are at higher risk.

Please note that home water filtration systems are not considered effective in restoring water quality in this instance.

It's expected that Prince Rupert residents will be under the Boil Water Advisory for more than a week, you can review the details of the City's Advisory here.

Somewhat surprisingly, Northern Health has little to no information related to the current Boil Water advisory available on their website or Facebook page at the moment.

However, there are generic notes related to Boiling Water issues which can be found from this section of their website.

Among some of the  advice that they offer:

A boil water notice is issued when a health risk is determined in the drinking water source. We recommend boiling the water for a minimum of 1 minute when used for:
Other treatment options:

For more items of note on the current situation follow our City of Prince Rupert Council Archive page,