A creative protest over the state of the Federal Government's pay processing system problems has found Prince Rupert civil servants baking up a recipe of protest for this holiday season, taking their message to the Federal Treasury Board through social media.

Skeena Bulkley MP Nathan Cullen posted some of the creative and edible works of protest to his social media streams this morning, highlighting the need for Treasury Board to solve the ongoing issues surrounding the flawed pay system which is creating some significant hardship for Federal employees across the country.

The Cookie protest also found its way to the National twitter feed for the Public Service Alliance of Canada which represents federal workers, with PSAC thanking the Northwest MP for his work in raising the issue frequently in the House of Commons. 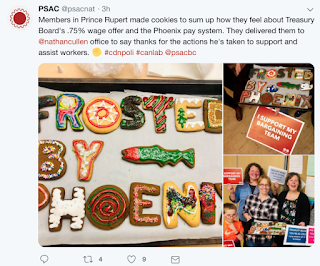 PSAC has made the Phoenix Pay issue one of its primary themes as it continues to get action from the Federal government, the most recent project is a petition campaign designed to send a message to the Prime Minister that urgent action is needed on the issue.

You can review more o the PSAC concerns through their website.

A recent report from the Auditor General of Canada noted that the Phoenix Payroll system was a significant blemish on the Federal government's financial record. With the report noting that 62% of the employees in our sample were paid incorrectly at least once during the fiscal year (it was also 62% in the 2016–2017 fiscal year).

The Auditor Generals report further observed that "Paying employees the right amount on time and resolving existing pay issues are shared responsibilities across the government. Public Services and Procurement Canada is responsible for processing payroll transactions, while the departments and agencies have an important role to play in providing timely and accurate information about changes to employee pay."


Further notes on labour issues on the North coast can be reviewed here.

For more items of note from the Federal government see our House of Commons Archive page, we also feature wider overview on Federal issues through our political blog D'Arcy McGee.
Posted by . at 11:54 AM