While majority chose First Past The Post, referendum results note differing opinions on electoral reform across Northwest BC 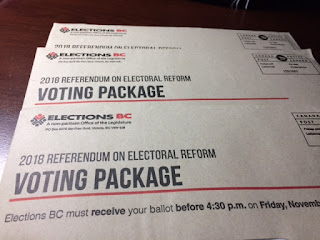 Thursday's release of the findings from the 2018 electoral reform referendum found that the quest for change in the Northwest had its strongest support on the North Coast, but even in Jennifer Rice's constituency the option for change went down to defeat, though the result provided for a much closer contest than elsewhere in the region.

As we outlined yesterday the province wide vote delivered a resounding No to Premier Horgan and his call for a "leap of faith" on electoral reform with 61 per cent of British Columbians deciding that the tried and true First Past the Post option was still their preference when deliberating on their democratic duty.

In the  North Coast riding the question asking voters to choose between the current system or a trio of alternative options found 2,282 voters or (52.70 %) selecting First Past the Post, while 2,048 voters or (47.30%) chose one of the three other concepts.

Elections BC noted that Sixty votes were listed as invalid from this falls vote.

In the other two ridings of the Northwest the distance between Yes and No was significantly higher.

57 votes were noted as invalid

47 votes were noted as invalid

When it came to the Proportional Representation options Elections BC had to dig deep into the results for a final determination, with two results posted from the vote, the second knocking one option of the list before determining which was the most popular of the three options for voters.

In the first round of the Proportional Representation results the findings were:

In the second segment of the Proportional Representation vote, the Rural Urban concept (one strongly endorsed by the North Coast MLA) was eliminated leaving for a tally of the remaining options.

In the world of shoulda, coulda, woulda, the secondary results indicate that had the overall province wide vote supported Proportional representation, then Northwest voters would have most likely gone the route of the Mixed member option.

Thursday's results delivered a statement from Premier Horgan who expressed his disappointment at the outcome, but one noting that the voters of British Columbia had made their choice.

So far North Coast MLA Jennifer Rice still has yet to outline any thoughts on the outcome of the electoral reform campaign, a project which she put some significant effort into on behalf of the Yes to Proportional representation side of the debate.

To the east Skeena MLA Ellis Ross, who had long been speaking out against the Proportional Representation process as introduced by the NDP/Green coalition outlined his pleasure at seeing the initiative go down to defeat in the form it was presented.

Mr. Ross's commentary coming through a number of contributions to his twitter stream. 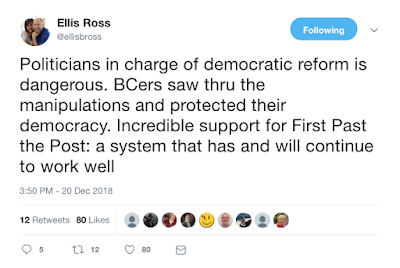 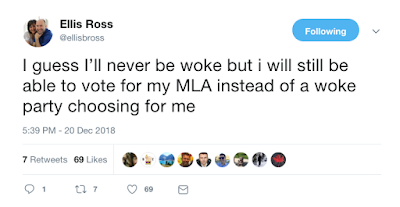 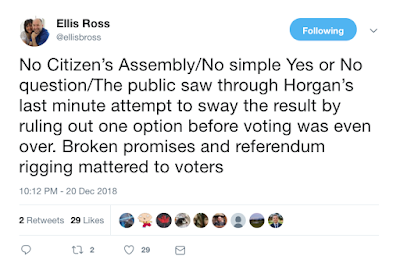 Nathan Cullen, the Federal MP for Skeena-Bulkley Valley, who has long been a supporter for a shift inn the way we vote and has been particularly critical of the governing Liberals reversal on the initiative, outlined his disappointment at the BC results through his social media streams yesterday.

Mr. Cullen also observed that voting reform options will still be considered in other provinces in the months ahead. 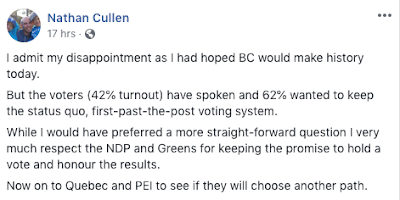 Update: Ms. Rice delivered her first comments on the referendum outcome in the mid morning period of Friday through her social media stream. 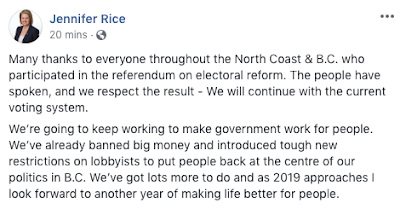 More notes on the release of the results from Thursday can be found from the Elections BC website.

For some of the reaction from yesterday from the province's political journalists see our political blog D'Arcy McGee.

To look back over the course of the electoral reform referendum process see our referendum archive page here.