Just in time for Christmas Eve the elves at the CityWest workshop have wrapped up their 12 Days of Christmas Plus One celebrations, the popular annual event that now has put the bow on the Northwest communications company's fifth year of gift giving to loyal customers across the Northwest.

Friday was the day to announce the closely guarded Grand Prize, which was a Smart TV and Soundbar combo courtesy of City Furniture.

The wrap up prize was delivered to Eric Hand in Prince Rupert who was on hand at City West on Friday to receive the entertainment pairing from City Furniture and CityWest.

The Grand Prize announcement was posted to the CityWest Facebook page. 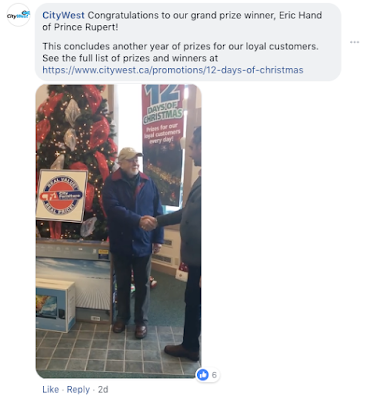 The daily awarding of prizes began on December 5 with the Bonus draw and then the Twelve Days began their countdown towards Friday's Big Finale. 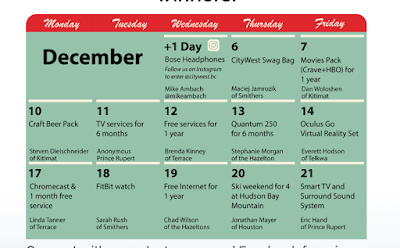 You can learn more about the annual giveaway from the CityWest website here.

With the Christmas New Year period now here, CityWest will have some holiday hours in place for customers to make note of, you can review those below: 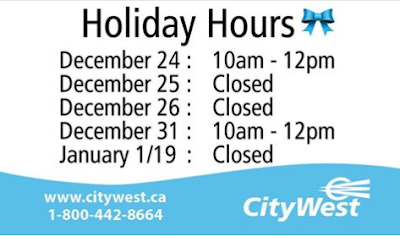 Email ThisBlogThis!Share to TwitterShare to FacebookShare to Pinterest
Labels: CiytWest 12 Days of Christmas