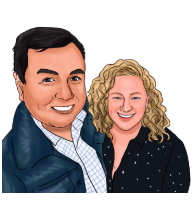 It's a project that started in early October and for hosts Russell Adams and Christine Danroth that first podcast of forty minutes of Rainbow Nation has morphed into a three month adventure that continues to go strong and now heads towards edition eight, with the New Year ahead and more topics to be explored should the duo look to continue with their information sharing concept into 2019.

The hosts who have been best friends for thirty years took on the project in order to provide the perspectives of a Lesbian parent and a Single Indigenous Gay male who live in Prince Rupert.

The first seven episodes have found the pair talking to a range people across the LGBT spectrum, peers and allies alike, listening to their stories and sharing a number of themes with their podcast audience.

Since the October debut, Russell and Christine have featured guests from not just the Prince Rupert area but from other areas who help to share their knowledge with listeners. Most of the episodes are about forty minutes in length, with an easygoing conversational style to go along with the informative notes on current events that are provided for listeners.

The podcast makes for a unique perspective for the larger community in Prince Rupert and reflects many of the day to day stories as told by residents of a small British Columbia community, offering up a comparison between experiences in rural BC, as compared to that which can be found in some of the larger communities of the province.

You can check out the themes and guests that have participated so far from their archive page of podcasts here.

A look at some of the background to the project can also be viewed through the Rainbow Nation twitter feed, which offers up some updates on the programming and other themes.

For more items of interest related to Community events on the North Coast see our archive page here.
Posted by . at 9:27 AM