Today is the last day of the afternoon shift for the CBC's Stephen Quinn, who will be taking his interviewing skills and program presentation to the morning show for the public broadcaster in the New Year.

Mr. Quinn is departing from his familiar spot with On to Coast, after having been selected to replace the retiring Rick Cluff as host of Early Edition in Vancouver's competitive radio scene. 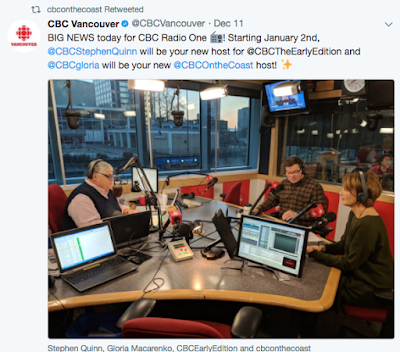 The retirement of the popular Cluff generated a fair bit of interest after it was announced, with the Vancouver media delivering a number of items reviewing his career and looking ahead to the changes to come for the CBC.

The veteran announcer with the CBC made public his plans to step aside from his duties earlier this month with his final day with the public broadcaster coming up on the 22nd.

And as he did, he set in motion a radio version of musical chairs, with a familiar name for Prince Rupert residents set to take up the reins of the afternoon program.

Gloria Macarenko, who has been a CBC rock star for a number of years now, was announced as the new host for On the Coast, a move which will see her leave the mid-day program BC Almanac for the later afternoon gig starting in January. 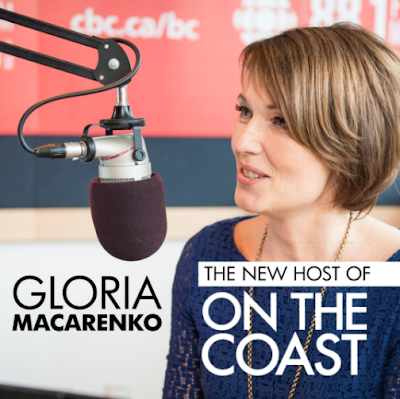 As her debut for On the Coast nears, her shift to the key afternoon drive position, should also deliver some increased listenership from the North Coast for the CBC.

As we noted on the blog yesterday, there is a fairly loyal listener base for the public broadcaster in Prince Rupert and many will welcome the opportunity to spend a few hours around the dinner time with the popular former Rupertite, who frequently returns to her hometown, often to lend a hand with a number of charity and community events.

For her new duties, Ms. Macarenko will be able to call on her vast experience when it comes to the issues for both the Vancouver area and for the provincial scene.

As well, the highly regarded broadcaster will make use of the experiences of her previous roles with the CBC, along with her polished presentation style, to help build on the audience that Mr. Quinn has developed over the last few years.

To offer a glimpse of what's to come for the afternoon program Ms. Macarenko answered a few questions for the CBC promotion department this week.

You can listen in to Stephen Quinn's final afternoon appearance from the CBC audio feed here, or on a radio (860 AM in Prince Rupert) should you still have one handy.

For media notes for the Northwest see our archive page here.
Posted by . at 12:50 PM

Email ThisBlogThis!Share to TwitterShare to FacebookShare to Pinterest
Labels: Gloria Macarenko to take over On the Coast program in January