Infrastructure, public works and recreation spending among the highlights for Capital projects in 2018

As the end of 2017 begins its countdown, Prince Rupert City Council and city staff have almost turned the page on the year, with the focus now on what's to come for 2018.

One area where they have provided a few hints towards is how they plan to approach their capital spending plans for the year ahead, with some snippets of those plans delivered over the last couple of weeks and there were a few surprises for residents of the city to give some consideration towards as they look ahead to the year ahead.

The City's Finance Officer Corinne Bomben outlined the recommended path for 2018 through a report which put a continued focus on infrastructure, some of the notable projects for the year ahead include:

Leading off the review were some notes on the  upcoming completion of the first phase of the water project which was approved in 2016, with the completion of the access road to Woodworth Dam and the lowering of the supply line below ground to protect it from slides and wind thrown trees.

That project has been funded at 47% through the Build Canada Fund, with 34% provided by Prince Rupert Legacy Inc. The balance of the project is to be funded through debt.

In her written report to Council, Ms. Bomben noted that due to some unforeseen creek crossings and landslides that were experienced due to rainfall, the project is now over budget.

No details were provided however, to indicate as to what extent the project had exceeded its original budgetary blue print.

The second phase of that project, the replacement of the Woodworth Lake Dam is also providing for some challenges with the detailed design work having been concluded and the result of that work bringing in a budgeted cost that is 45 percent higher in cost than the initial conceptual design.

To address that issue, the CFO outlined how it is anticipated that the shortfall in funding for the project will be covered through debt resulting in Utility fee increases, unless other sources of revenue related to activities on Watson Island materialize.

As they head into the next year Council will be asked to consider a borrowing bylaw to fund the shortfall in both phase one and phase two by midyear of 2018.

The City also has plans for a the third phase of the water project, that is the replacement of the Submarine Line to the City, towards that project,, the city has applied for 100 per cent funding under the UBCM Strategic Priorities Fund Infrastructure Grant. The notification of that award is expected to be made sometime in early 2018.

Solid Waste issues are also on the radar for the year ahead, as work continues on the West Berm expansion at the city's landfill site on the Ridley Island Access road.

The completion of the West Berm Expansion, which is expected in 2019 will result in a couple of more years worth of airspace which provides the necessary time for the opening a new thirty five year landfill cell.

As the CFO noted in her verbal presentation, that expansion was put into motion back when the city was finding a rapid increase of use of the landfill owing to the nature of the speculative period found in the community of 2014-15.

As for General Operations for the year ahead, the CFO's report highlighted a number of areas for action in 2018.

The first was some background related to the planned upgrade in 2018 for the existing RCMP cell block, which will see that project funded through short term debt.

The Recreation Centre will also see some attention in 2018, with replacement of the hot tub at the Earl Mah Aquatic Centre expected for 2018, as well the the CFO noted the the boilers at the Recreation complex are in need of replacement, work which is slated for 2018.

The Finance Department has also called attention to the need to replace the City's Garbage trucks, which have become worn out units. City staff has been able to research a grant that would fund such acquisitions by 80 per cent.

The new units would also potentially allow for curbside recycling, should the city decide to take that path in the future.

The balance of the cost for the trucks would be funded using short term debt.

The flusher truck, would be replaced using equipment reserves.

The Public Works Building is also nearing the end of its life, suffering from a range of issues and is in need of replacement, as it is no longer considered satisfactory for the employees to use.

As part of the report for Council, Ms. Bomben outlined how the staff had been made aware of an opportunity to purchase 6 modular offices which were used during the Alcan modernization proejct, with the city able to access them at half the normal cost.

The units being considered had been used for under one year and the combined cost of purchase, shipping and reconfiguration is stated as at $330,000.

With the addition of a foundation for the new buildings, the total cost is estimated to be at near $550,000 dollars to put the new facility in place.

That would make for a significant savings from the previous estimates of a replacement facility which had been pegged at 3.5 million dollars. City Staff has recommended to Council that they move forward with the purchase of the modular units, with the cost to be funded through short term debt.


Ms. Bomben also noted that with Transition Prince Rupert set to move forward with their initial work on the McKay Street Park project,  the city will be returning the Doug Kerr ball field at the Civic Centre back to use for youth sports groups in the city.

The current use of the field as an unsanctioned Dog Park will be shifted over to the McKay Street area, with Transition Prince Rupert having incorporated that element as part of their launch of the park project in 2018.

Other work will take place on the adult ball field at the Recreation Centre, as well as to improve drainage at Roosevelt Field.

The Full review of the Capital Works and Purchases planning for the year ahead was provided to Council at their December 4th session and can be reviewed below: 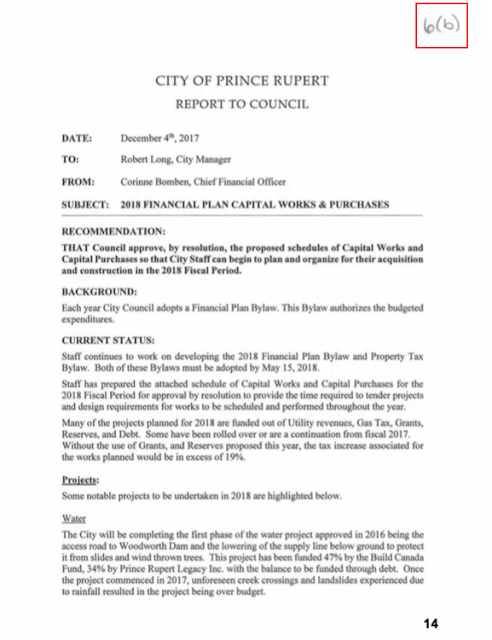 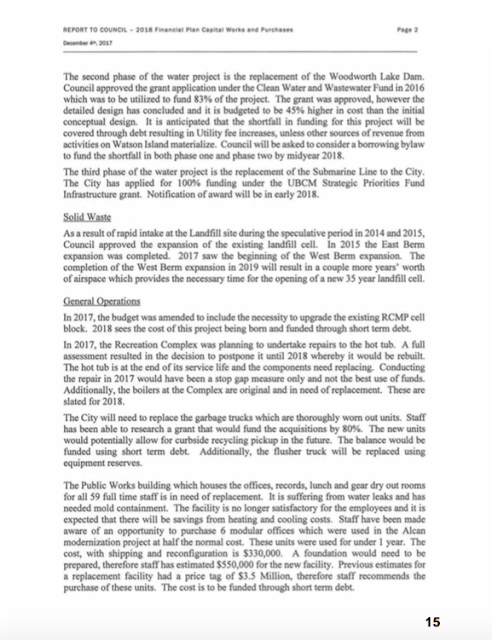 Her review for Council along with comments from Council members on the elements related to it, can be reviewed from the December 4th Council archive starting at the eight minute mark.

Some of our past notes on Capital Spending and infrastructure are available here.

For a review of more items from this past Monday's City Council session see our Council Timeline, while further notes coming out of the Monday session can be reviewed from our Council Archive page.